On Christmas night when the snow was turning blue outside, I finished the last SKIRMISH illustration- Miri, crouching with a pistol in glittering Starfall drifts.

Then I did something I've been craving for a long time: 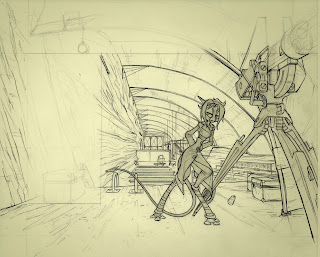 It feels fitting that our final SKIRMISH game art was a Wayward Astronomer character.   The illustrated novel and the battle game are what kept me from focusing exclusively on Volume 5.

Investing my time in those Dreamkeepers assets was a calculated, but real, risk.

Amidst the endless fire-hose of internet content and cheap updates, most readerships would falter and wander towards the nearest set of jingling keys.

But Vivid readers are no ordinary readers- believe it.

You decide for yourselves what's good, where the potential is, and what you want to build.

In fact, during our Year of Risk, Dreamkeepers readership grew stronger.   Book sales boomed online and at conventions, Patreon grew like never before, and e-mails from enthused new readers continue to fly in.

I think veterans and new recruits alike can see what we're building towards- and it's exciting.

This year we broke new ground on multiple fronts:


Every gamble scored.   Now my hands are free to double down on Volume 5 production- and it's all thanks to our backers.

That's why, for the first time in history, we're going to change up our book release system.

Chapter 13 of Volume 5 will be released early online to all our Patreon and MakerSupport backers.

The surge in support from you guys this year has been astonishing- thank you!   We couldn't have continued with our work, and dared launch such an audacious growth strategy, without you.  It's due to your support that we've been able to maintain weekly Prelude updates while nailing these projects, and it's thanks to your support that we'll now be unleashed on Volume 5 production.   So it only stands to reason that you, our backers, should get a special thanks in the form of early access to the first chapter of the story.

Every backer at the $1 level or higher will have access to the Volume 5 updates when they release- likely sometime this spring.

I have 8 more pages to draw in Chapter 13, then I can switch gears and start shading the pages for you.

Meanwhile, I'll be managing the manufacture and fulfillment of SKIRMISH, Liz is coloring Firebrat pages and sculpting-

First off, FACTION WARS.  We're launching a light, fun public and free Dreamkeepers roleplay game.  I'm serving as the GM for one test game.   Then I'll post videos about how it works, step out, and let you guys manage and play to your heart's content while I continue scribbling Volume 5.

Next up- I'm planning an Online Convention for sometime this spring.   If you've ever wanted signed books or other Dreamkeepers merchandise, but can't make it to our rare convention appearances, then this is for you.

We have a stash of awesome stuff that I don't sell online, because I don't want to constantly be interrupted with mailing chores.   But if I can consolidate all the mailing into one week, that works- and plus we can host some online panels in the form of streams and such.

The online convention will likely line up with the next Vivid Publishing book campaign- we have a verbal agreement with rising star Boneitis to publish False Start.

So strap in- Vivid Publishing is going to flex again.

And, with the success of this year, I can declare with great accuracy our official slogan:


Dreamkeepers:  The Undisputed Gateway Furry Saga.
Posted by Dave and Liz at 11:45 AM No comments: 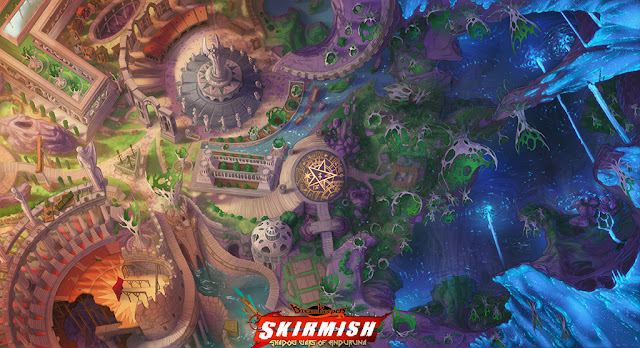 Pre-Orders are still up here:  https://www.kickstarter.com/projects/2083757038/dreamkeepers-skirmish-shadow-wars-of-anduruna
Posted by Dave and Liz at 3:25 PM No comments:

The Last Jedi and IMPOTENT ENEMIES 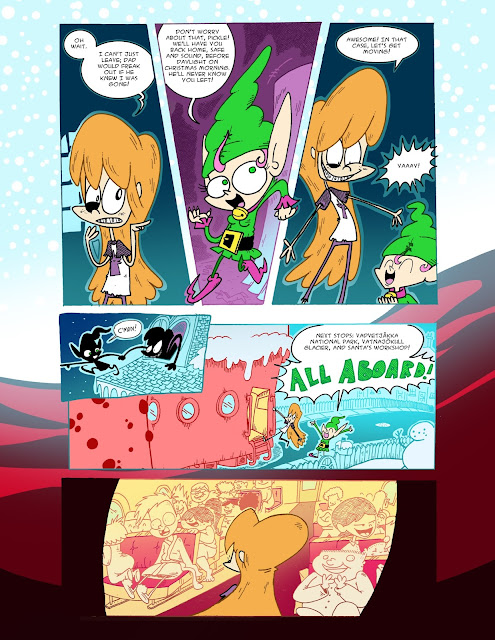 Last sample of the campaign- now in the final hours:  https://www.kickstarter.com/projects/2083757038/firebrat-graphic-novel-the-true-meaning-of-christm

We crossed 100 backers, and hardcover printing has been unlocked- with foil stamping tantalizingly close.
Posted by Dave and Liz at 1:44 PM No comments: 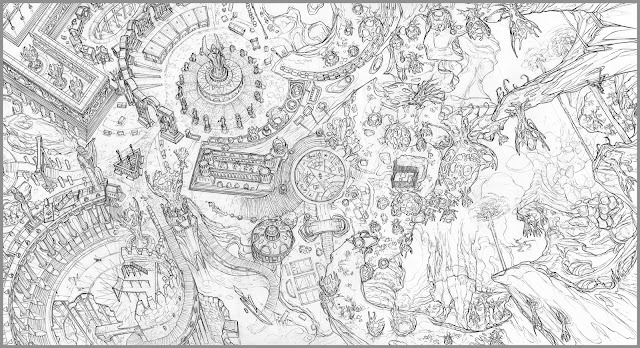 Should kick off around 3:00pm Eastern time.

This Chat-n-Sketch is a bit different- instead of taking sketch requests, I'll be shading the epic playmat art for SKIRMISH.  And we don't have a guest itinerary this time- I've been too busy to assemble one, so we're going to let the Discord moderators handle guests on the fly.

I'm especially hopeful Mike Rosen of the just-funded Firebrat Kickstarter can make it, so we can hear his perspective on the book.    Also invited are any of our usual suspects, people who've been on the stream before, or anyone the mods deem interesting.

So we'll see how it goes!  This Chat 'n Sketch could be a bit more relaxed and laid back- or maybe it will erupt into chaos.  Either way, art will be unfolding throughout, and we hope to entertain.
Posted by Dave and Liz at 9:46 AM No comments:

The campaign continues!   You glorious folks have brought us past 4K- nearly 90% to the goal.  The final showdown lies before us.

Anyone backing Firebrat at Tier 6 ($45) or higher gets not just the glorious Tier 6 rewards- they also go on Vivid's Good List.

Members of the Good List will be mailed a free signed and numbered Limited Edition copy of Dreamkeepers Volume 4 as soon as the campaign successfully closes.  Only 500 are in existence- and Good List members will receive one.   (Not sure if they'll arrive before Christmas, but we'll ship them right away.)

Plus we'll hook up Backerkit to make all Dreamkeepers titles available as optional add-on purchases, signed by the authors Dave & Liz.    So if you can't make it out to one of the few conventions we attend, this is your chance to snag some signed Dreamkeepers graphic novels.

And one last announcement to fuel the final stretch of our battle against Santa:

Liz has made a declaration.

All these colored page samples put her over the edge.   Full-color interior pages were a stretch goal- but no more.

Liz has declared that she will singlehandedly color the interior of the book herself, for free.  Because nobody can stop a Liz bent on creativity.

So without the need to procure freelancers or raise money, Firebrat will now be printed in glorious full color, inside and out- once the campaign is successful.

So if you want a gorgeous first-edition full-color book of viciously sarcastic Christmas fun, not to mention the perks of being on Vivid's Good List, head on over.   https://www.kickstarter.com/projects/2083757038/firebrat-graphic-novel-the-true-meaning-of-christm 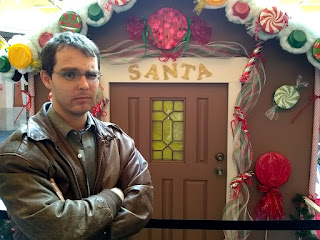 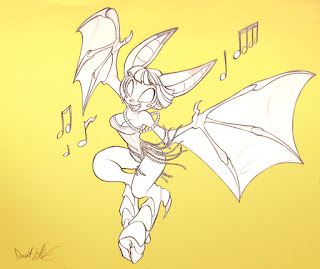 We're back from Midwest Furfest- now officially the largest furry con in history, clocking in at over 8,000 attendees.   Next year will it break Vegeta's scouter?

It was a fantastic time meeting with awesome people- Boneitis (aka the World's Greatest Furry Artist) crashed the Dick Show with a furry invasion, although I hear only Reagent was bold enough to flash his tail.  Tracy Butler and Eric premiered the brand new Lackadaisy card game, Vivid authors Skidd and Phuufy debuted Volume 2 of their UberQuest series, we caught up with Kay Fedewa of the Blackblood Alliance, along with Michael of EPF games, the developer of SKIRMISH, Luke of Promcolco (our plush & wallscrolls specialist), and Karen, Izabela, plus more friends and readers than I can feasibly list.   Thank you to everyone who stopped by to say hi and spend some time with us, you made the weekend spectacular.  8 )

And thanks to our amaznig readers for a solid weekend of sales- nearly everything we brought sold out at the table, Volume 2, 3, 4, Wayward Astronomer, and Prelude Collections.

I put myself even further behind in my posting queue- a big batch of convention commissions was nailed.  Maybe Liz can start loading these up in the Daily Artifact Patreon postings.  https://www.patreon.com/Dreamkeepers

Now that we're back, I can attack the final SKIRMISH art needed for production- expansion decks.   It'll be quiet online while I draw, then expect a spurt of streaming- plus a new Chat n Sketch coming up this weekend, featuring Mike Rosen.

And we'll be gearing up for the fateful final week of FIREBRAT- the one-of-a-kind Christmas graphic novel Kickstarter.  https://www.kickstarter.com/projects/2083757038/firebrat-graphic-novel-the-true-meaning-of-christm  It could go either way- but we've got some special offers in mind for the fence-sitters, so stay tuned.