Welcome to the latest behind the scenes sneak peek at Volume 3! One question you may be asking yourself right now: Why is there no actual Volume 3 progress in this update?

What, exactly, is distracting Dave and Liz from working on the next book? Halloween is over, so the contest is no excuse. Did a circus camp outside their apartment? Did the 'shiny and sparkly' merchant roll into town? Or did they decide to kiss this cold, cruel world goodbye once and for all, and start playing World of Warcraft?

Don't panic, I promise you. We would never do something that drastic.

Still on the same web design crusade that saw the 'Battle of the Dreamworld Pages', we've come to our final and greatest remaining objective:

Predominance is being placed on the web design right now because of our big-picture Vivid Publishing strategy. The greatest barrier to success is our lack of cash: no money equals small print runs, equals virtually zero profits on book sales. And Mace is demanding a bigger cut of the revenues. (I think Whip gave him the idea.)

So we aim to build our 'Dreamkeepers' audience larger while creating Volume 3, hopefully pushing Pre-Orders into (finally!) the range of profitability.
Building an audience means marketing - and with our budget, not one single cent can be permitted to go to waste. (We're not the government.) That means the website must be as appealing as possible to fresh new visitors, so that any advertising expenditures we make have the maximum possible customer retention rate.

(So, if this nice block of text didn't drive the point home, I HAVE AN EXCUSE! Volume 3 is going slow, but I have all sorts of reasons! The more words I use, the more justified I clearly am. Why, here's some more words now!)

Once digital book sales are in place to offer a lower pricing tier to new readers, the site will be ready to roll.

Of course, there's some work to do before we can finalize digital sales. Over the years of selling graphic novels and checking through them for misprints, we've compiled a rather intimidating list of quirks and inconsistencies in the art and text... Now, the normal person (As opposed to the occasional godlike-fan who knows all and sees all) wouldn't notice any of these snafus during a casual read-through. But they are there, and before immortalizing the pages online, we're fixing them.

Now, don't fret that your book is suddenly going to be obsolete due to a feverish bout of revisions on our part - we're not changing anything major. Plot isn't shifting an iota, the narrative remains identical, zero additional visual clues appear, and Lilith won't suddenly have a third katana-toting arm. As much as I argued for it. We're just correcting visual consistency issues (buildings, minute character detailing, etc.) and the occasional grammar error.

Compounding the task of corrections is the headache that, during production, I didn't have finalized references for several characters and settings - Notably Scinter. That bastard changes more often than a chameleon in diapers. In addition to writing out the history of the Dreamworld and finishing the website, we've been compiling a belated binder of detailed, official character and location references. Better late than never, right? 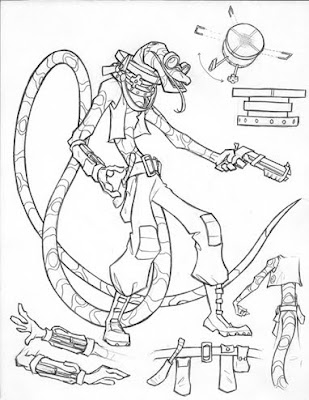 But summing up, I know it may seem right now as though our progress is frozen in place. And in terms of new Volume 3 art, it is. But we're making final preparations to launch Vivid for the long haul, both business-wise and creatively, and under the ice the currents are surging. These calibrations have been shifting into place over the entire last year or two, and are just now culminating in the exclusion of focus that brings completion.

Unless I can find some external source to blame, blame is always the best. If anyone can help me brainstorm some stuff to blame, let me know.

Just bear with us, we've almost got the last piece of this monster bolted down - and once it gets rolling on the right track, I don't think it'll stop.
Posted by Dave and Liz at 4:47 AM 5 comments: