I had this irrational feeling that spring couldn't come until the Volume 1 and 2 corrections were finished. Sure enough, as soon as the final tweaks were completed, we were rewarded with a pleasant, invigorating thaw. Again, that magical time of the year when I can hurl bread at geese has arrived.

It certainly feels magical to me. Or rather, as though some binding curse has been lifted. Back in the fall, I thought a month would be all it took to polish off the fixes in both books. Ah, Past David, so young. So naive.

Last winter, I was saddled full time with commissions. This time around, it was an endless tundra of corrections, with Volume 3 frozen tragically in mid production, like a clapping Neanderthal in a block of ice.

Finally clearing this last hurdle feels absolutely great: The grand task of getting our website to 'good enough' status, started last September, is concluding. Digital book sales will be announced soon, as well as our fun-packed Page Comparing Contest. So fun, it's capitalized!

I'm currently attending a laundry list of minor tasks - things that I know I'll never take the time for once Volume 3 production is steaming ahead. Over the next week or two I’ll be retooling the horizontal-format site navbars so they match the verticals, finishing that quickie LOL-Wisp illustration from last year, hosting the Dreamkeepers Facebook page, posting the foreign language links, doing taxes, etc, etc... And also creating some art for the Anime Punch convention. I was pleasantly surprised this year when they let me know there was still room in the artist's alley, so I signed up and drew this for their table discount: 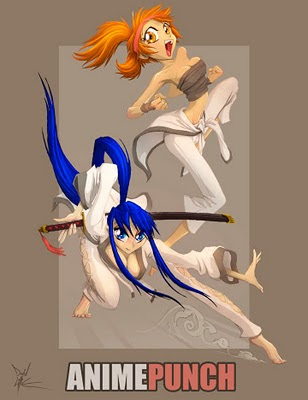 Plus, I have to admit I was just itching to draw after such a marathon of less glamorous work. I've been doing Dreamkeepers exclusively for years now, and was curious to see if I could still play chameleon with other styles, like I did during my freelance days. Going for the straightforward anime look was fun for a spot of variety.

Anime Punch is in early April. By then, V3 production should be completely thawed and rolling, with no turning back.
Posted by Dave and Liz at 5:20 AM 2 comments: