We're in the final week- the Wayward Astronomer Kickstarter is hurtling to the finish line.

The goal has been nailed, as well as the first stretch goal- and the campaign is only hundreds away from unlocking buttons:

If you haven't already hop in and check it out- time is growing short, and those first-edition hardcovers are going to last long if they make it to your bookshelf.
Posted by Dave and Liz at 9:56 AM No comments:

With the goal being met, hardcover books are now assured- and there are loads of other rewards in the works too, from posters to metal art prints, and- if we hit some stretch goals- much more!

Hop over and check out what Geo has to offer, and let's enjoy a stellar book launch together!
Posted by Dave and Liz at 9:48 AM No comments:


Time for Lackadaisy- a review by Riiser at the Webcomic Relief!   Liz and I got to pop in for cameos here, and probably had just a liiiiittle too much fun in the process.
Posted by Dave and Liz at 2:09 PM No comments: 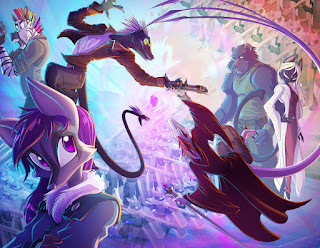 https://www.kickstarter.com/projects/kafelnikov/the-wayward-astronomer-a-dreamkeepers-story  If you haven't yet, take a look- this illustration doesn't really do the story justice, Geo wrote a spectacular novel.  I can scarcely wait for those thumpingly beautiful hardcovers...  E )
Posted by Dave and Liz at 8:52 PM No comments:

Geo has an interview live in 30 minutes here:  http://www.blogtalkradio.com/akindvoice/2016/03/16/a-kind-voice-on-books-interview-with-author-geoffrey-thomas

Just wanted to toss that link out- and if you have any questions about novels, writing, publishing, crowdfunding, or the Wayward Astronomer campaign, get 'em ready!

Tomorrow night, the weekly DK chat will be a livestream with both Geo and I, answering any questions you want to toss our way.

And if you haven't yet, check out the Wayward Astronomer on Kickstarter for your chance at first-edition copies of the novel:   https://www.kickstarter.com/projects/kafelnikov/the-wayward-astronomer-a-dreamkeepers-story

I have more art in the works for both the campaign and the interior of the novel itself- it's going to look great in print.

The Wayward Astronomer campaign is ramping up- check out the fresh new Furcast interview:  http://youtu.be/kOGAJynGZG0?t=1h45m

Another interview with Geo is slated for tomorrow at 7pm EST:  http://www.akindvoice.org/

There's also a trailer for the Kickstarter hosted up youtube- https://www.youtube.com/watch?v=Xfsg5k5UYmk&feature=youtu.be

I've got a dynamic art print in the works for the campaign- I'll announce the link on Patreon and twitter when we're getting ready to livestream the shading.

The campaign is getting fun- and it even involves an experimental new tactic:

Operation Texas Rain.   Details in the latest update:  https://www.kickstarter.com/projects/kafelnikov/the-wayward-astronomer-a-dreamkeepers-story/posts/1517558
Posted by Dave and Liz at 3:50 PM No comments:

The Kickstarter is live now- check it out!  https://www.kickstarter.com/projects/kafelnikov/the-wayward-astronomer-a-dreamkeepers-storyWe're crowdfunding the release of the first-ever Dreamkeepers literary novel- The Wayward Astronomer, by Kafelnikov.  If you haven't yet, give it a read!  The early draft is free on Kafelnikov's deviantart: http://kafelnikov.deviantart.com/  Complete with murder, intrigue, powers, shock-troopers- and more.  It's a story years in the making.I couldn't put the book down when I read it- it's a thriller, and a good one.  It could be claimed my opinion is biased, so hear what other readers have to say!  There are some testimonials in the Kickstarter launch video.I'm excited to contribute some chapter illustrations and other artwork to the novel- come take a look!  https://www.kickstarter.com/projects/kafelnikov/the-wayward-astronomer-a-dreamkeepers-storyDreamkeepers continues to grow- it's fun to be a part of it.
Posted by Dave and Liz at 4:20 PM No comments:

After reviewing the devastation within the #Dreamkeepers Faction contest, it is my great privilege to present to you, fine ladies and gentlemen: 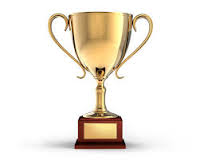 Rarely does a fandom come together in such a celebration of culture, elegance, and achievement.  Let us raise our champagne glasses together, and toast these intrepid meme warriors: 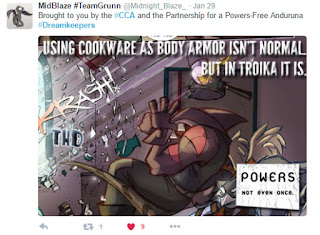 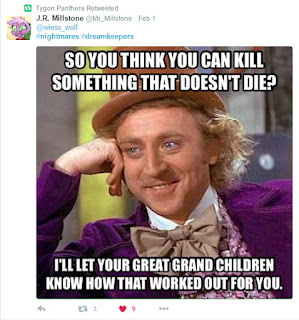 Best use of a Meme:  @Mr_Millstone Hillary & Bernie 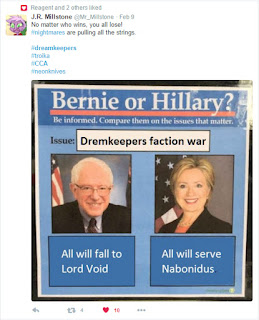 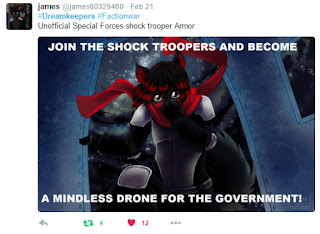 Most Frantic: @PizzaSkunk  "Fuck That Shit" 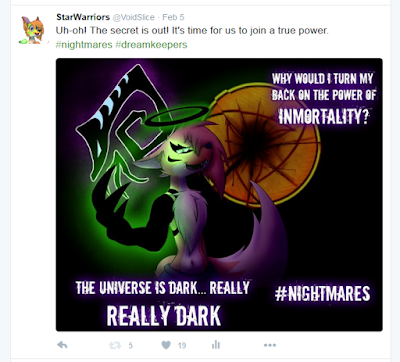 Most 'Liked'  post in #Dreamkeepers: @JohnDeadmen #CCA for Victory 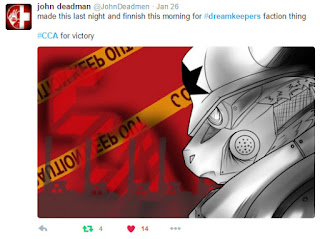 Most Audacious Infiltration of a comment area: Orange Corn in Entertainment Weekly.  http://www.ew.com/article/2016/02/13/deadpool-review-betty-white 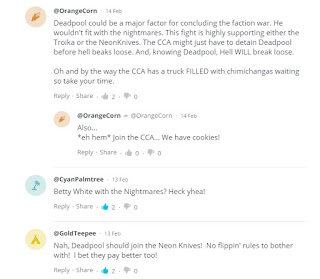 And last, but most certainly not least: 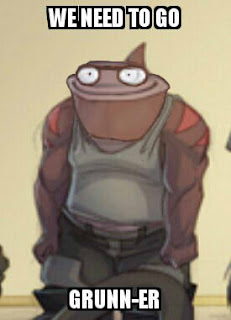 I can think of nothing more failed, and more epic, than the entire Team Grunn Faction.  The entire faction is awarded Most Epic Fail.


Remember, only posts for losing Factions could be considered for Honrary Awards.  Thanks again to everyone for a ludicrously fun contest, and thanks to the elites who helped boost the ensuing Operation Sidewinder to 90,000 impressions and 5,000 engagements!

Good times- with more to come.

Next up, we'll be announcing the launch of a new Kickstarter.  Our very own Kafelnikov, leader of the DA Dreamkeepers Group, is crowdfunding the production of the first Dreamkepers print novel- Wayward
Posted by Dave and Liz at 3:29 PM No comments:


When I first had the inkling for a Faction Contest, I had no clue what might happen.    Would it be fun?  Boring?  Would anyone even participate?

Memes, taunts, and even artwork culminated in the day of reckoning yesterday, when only one Faction could emerge victorious:

It came as a twist to me- I was actually expecting the insurgent reader-created #TeamGrunn faction to win.  But in the end, following Grunn proved to be a drunken, fun, unhinged ticket to failure.   ...Which somehow seems entirely appropriate, now that I think about it. 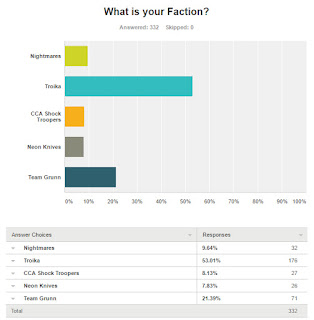 Time to send free books to everyone in the Troika faction!

But valiant- and hilarious- efforts were made for the competing Factions, and all of those participants are now eligible for Honorary Awards.    http://dreamkeepers.deviantart.com/journal/FACTION-CONTEST-586566028

If you posted something that you think qualifies, send me a screenshot!  Dreamkeeperscomic(at)gmail.com

I'll announce Honorary Awards on Monday, after- this weekend.

This weekend, when our ulterior motives underpinning the entire contest are revealed.   http://www.dreamkeeperscomic.com/forum/?t=711

What purpose could we have in filling the #Dreamkeepers hashtag with content?

With training readers in hashtag warfare?

Right before the theatrical release of Zootopia?