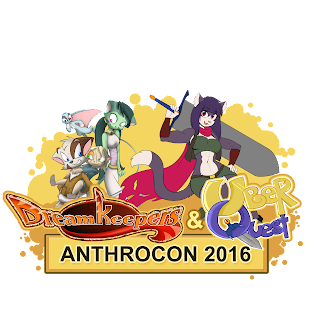 Vivid Publishing’s hitting AC!   We’d love to see you there.  And exclusive for that weekend, we’re having a special sale- at the con, and online too!
At the convention:   Buy an Uberquest graphic novel, and get Dreamkeepers Volume 1 for free.    The price of V1 at the convention will be dropped to $10.
Online, Volume 1′s Amazon price will drop to $5 for the weekend:  http://www.vividpub.com/Dreamkeepers.php?pg=dreamkeepers
Read the books for free right now:
http://uberquest.katbox.net/comic/an-uber-start/ http://www.dreamkeeperscomic.com/GNSaga.php?pg=1
Thank you to the readers for giving us the ability to grow and offer our first big sale- I think it’ll be fun for everyone!
Posted by Dave and Liz at 9:18 AM No comments:


Yesterday, Deviantart deleted a reference turnaround from our account, and proceeded to erase Dreamkeepers fanart by other creators.

No vital organs have been penetrated, my blood loss appears to be minimal.  I've contacted FEMA, and expect a disaster relief task force to arrive at any moment- let's just pray they can tunnel through the salt deposits in time.

Though minor, this event is a good enough reason to articulate my thoughts on artistic expression, and it's valid limitations:

There.  Mission accomplished, let's pack it up.  Is there really anyone out there declaring that lines on paper should be banned if they form the wrong shape?    ...Yes?  Oh.  Marvelous.

Most people intuitively get artistic freedom, but it was eye-opening seeing equivocations stray in on twitter.

"Surely," some postulated, "there is a gray area here."

If you draw the lines light enough, then yes, you can get gray.

Now, are platforms entitled to have their own policies, to curate what content they deem acceptable for consumption?

And we can point out when those policies are wrongheaded, so let us commence.

Lines on paper hurt nobody.  Artists should be free to depict anything, and audiences free to see whatever they want in fiction.

Nobody is out there re-enacting Clockwork Orange and forcing strangers to view art against their will.  Provided users can add relevant filters and avoid the stuff they wish to avoid, there is no reason to crack down on 'bad' art, no matter how sinful or problematic it may be.

Critics are still free to decry content they dislike, and explain their rationale.  Sometimes appalling work can trigger discussions of value.  But when content is banned from the get-go by misguided policies, even critics are deprived of an opportunity to enumerate their perspective.

And something being decreed "offensive" is a non-starter for any serious thinker.  An ever-expanding sphere of aggressive sensitivity is not a sufficient justification for circumscribing the freedoms and rights of artists.
Anyone with cartoon-related PTSD has the power to adjust settings on their accounts, and create their own online safe space- but they should not have the power to impose those preferences on everyone else.

Those trying to argue that fiction somehow translates into real-world harm must surmount a formidable body of scientific literature indicating otherwise.  Rise in shoot-em-up video games?  Look at that, drop in violent crime statistics.  How curious.

Why not blame fiction?  Anything to avoid acknowledging the existence of personal responsibility.

The stray killer who plays video games is strikingly similar to the stray killer who eats breakfast in the morning- that is to say, responsible for their actions.  Unless they cannot distinguish fiction from reality, in which case the relevant factor is mental illness.

At no point is it plausible to point at a drawing and declare, "There, that's the cause of it all."

The moralizers were wrong to burn comics in the 1950's, wrong to demonize D&D, wrong to blame real-world violence on Doom, and they were wrong to claim gaming was generating a sexism tsunami.

But I'm sure the next moral panic will be right on the money.

Killing people is wrong- isn't it wrong to make a game of it?  Robbing banks is unethical- should we discourage heist movies? Underage sex is illegal- who could possibly condone depictions of it?

Society at large seems fine with depictions of murder, children, and even murdered children, so:

Few topics demonstrate the ugly results of fuzzy thinking with greater clarity.  So let's be clear.

There is a vast galaxy of difference between lines on paper, and the abuse of a vulnerable, thinking, feeling human being.  The two are not merely different by degree- they are utterly, qualitatively distinct from one another.   They will never be even close to the same thing.

Doodling lines on paper violates nobody's rights.  Any debater seeking to score points by conflating that with real-life abuse is welcome to exit the conversation now, because it does neither artists nor survivors any favors to dabble in intellectual dishonesty.

Underage nymphs copulating with infants on the Ark of the Covenant while promoting racism and shitting cephalopods onto the Bible, Atlas Shrugged, and Das Kapital all at the same time- in full Nazi regalia, while shooting gorillas and screaming the praises of the Wild Thornberrys.  For the purposes of this conversation we'll shorten this depiction to 'The Worst.'

Am I really suggesting that platforms allow The Worst?

Now, I am not defending The Worst.  How could I, it's literally The Worst!

I hope we can all recognize that supporting the right to free expression does not entail approving of what everyone does with it.  I'm not defending The Worst, but I am standing for the right of someone to depict it in fiction.  Because even The Worst is just marks on paper- or pages in a book, or harmless light from a screen.

So let's say, for the sake of argument, that a platform can successfully police The Worst from their site.  After all, 'artistic freedom' is so abstract.   But art depicting kids in sexual situations?  Come on, realistically we shouldn't allow that, it's just wrong!  Why should we permit immoral imagination?  If we don't like it, then nobody should have the option, right?

Let's take a look at an excerpt from DeviantArt's policy.

Unless you think about it for longer than ten seconds.

Mature, complex stories grapple with the darkest regions of human nature.  These works can sometimes fulfill the highest purposes of fiction.

So what if a comic wanted to explore the grim world of underage human trafficking, and still be on DeviantArt?

But surely mods will be reasonable when deciding how to apply their powers- they wouldn't violate the spirit of the rule to strike down innocuous content.

If you really believe that anonymous unaccountable censors will always refrain from vindictive abuses of power, well, bless your heart.

Perceptions of double-standards and capricious moderation are one of the most corrosive threats to the long-term health of any social platform- just look at the 2014-2016 stock value devastation of twitter.  Users do not like the feeling that a platform is picking winners and losers.

And, of all things, fiction does not need to be policed.

But what about liability?  Platforms have to censor The Worst, or they could risk legal problems.  For all I know, this excuse might even be true- but I'm not a lawyer.  I'm an artist, so I'm going to stand for creative freedom.   If bad laws are impairing the ability of platforms to operate, they should grow a spine and work to change those laws- rather than caving and dumping artistic limitations on a young generation of developing creators.

If the law or pious payment processors or rampaging puritans are the problem, then let's clarify that and deal with it directly- rather than using it as an excuse to stop talking.

And in fact, the moment a platform draws a line- where *this* art is acceptable, and *this* art is banned- they create a cataclysmic headache for themselves.

Now they have to police their entire universe of content- they strike the absurd posture of adopting responsibility for what every one of their users creates and shares.  This is like the telephone company taking responsibility for threatening phone calls, and tasking themselves with monitoring all conversations to remove the wrong bits in real-time.

And once they begin censoring 'bad' content, it constitutes tacit approval of everything they don't remove.

Enable mature results and search using a few colorful terms on Deviantart, check out some of the sick shit they approve of.

Even if they're making the Wild Thornberrys, I'll stand for the creative freedom of everyone.  And art platforms can step on that freedom if they choose- but that doesn't mean we have to shut up and like it.

We should allow people the creative freedom to depict even horrible things in fiction- sometimes that's the best way they have of coping with those thoughts or experiences.  After all, if it really is some hideous sin, what better place for it than fiction?  Sometimes it can even help others struggling across the same emotional landscape.