We start by killing the cameraman and then things get creepy:  https://www.youtube.com/watch?v=mlvdZrRl27A

The latest episode of BGC!  And I might add, the LAST episode you should ever watch because they dredged something up from my past that was never supposed to see the holy light of day so definitely don't watch their next episode right okay? Okay.
Posted by Dave and Liz at 8:01 AM No comments:

I've never seen Patreon growth like this before- it's soaring.  What's going on?

Thank you!  This will have a massive impact for Dreamkeepers.

We've managed our best in the past-  there have been times where I'd be running 2 miles to and from work in the sleet, to make ends meet.  I could regale you with tales of woe, misfortune, and occasional privation, but those things don't matter.  I'd rather share comics- suffice to say that scarcity and its management has been the fabric of my experience since I was young, and I know it's the same for many of us.

Going from having too little to having enough is a humbling relief.  Now instead of focusing on managing scarcity, I can focus on creating more and better work.

Everyone thank a backer!  With their support weekly Prelude updates are secured for all of April, plus a Chat 'n Sketch stream.  (Date to be announced. )

For new recruits and veterans alike, welcome to the core of the readership.  I'm excited to start sharing Volume 5 pages with you on April 4th.

Thank you for your support in taking Dreamkeepers to new heights.  We're going to see some incredible things together.

( PS- read this post with a pretty illustration on Patreon- https://www.patreon.com/posts/recordbreaking-17847301 )
Posted by Dave and Liz at 1:15 PM No comments: 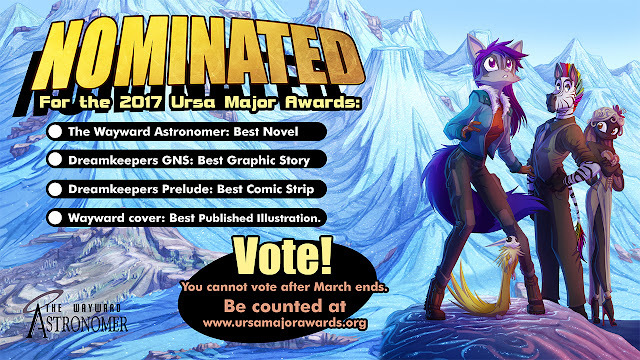 With your help, we can go from nominations to victories.  Thank you to everyone for helping bring Dreamkeepers so far from where we began!
Posted by Dave and Liz at 4:24 PM No comments: 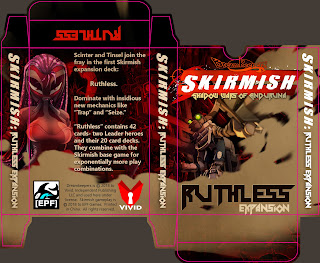 The expansion decks come packaged separately- so I figured, we need to call them something cooler than just "Expansion Decks."

Scinter and Tinsel together make the "Ruthless" Skirmish expansion. Because they certainly are.

I can hardly wait to see these puppies for real.
Posted by Dave and Liz at 7:15 PM No comments: 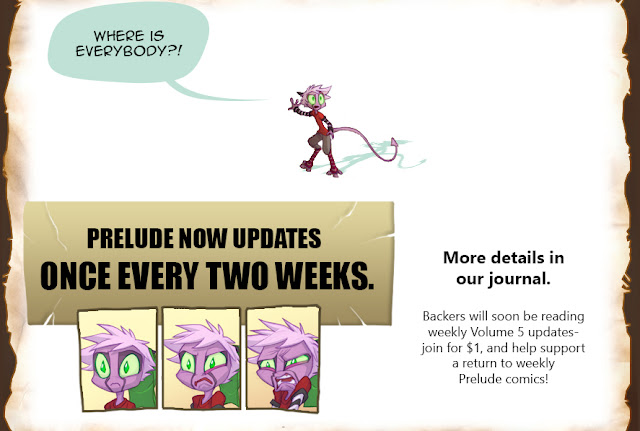 Prelude will shift to an update schedule of every other week.

Technically we should have done this a year ago.

Weekly Prelude was a reward promised for the "Full Time" production milestone on Patreon, which hasn't been unlocked.  We made weekly updates because we loved the story so much, and we could pull it off.

But Skirmish manufacturing costs are exceeding my estimates, so we can't maintain weekly Prelude until it's actually funded by Patreon.

If you value good original content every week, and you're not a backer, consider joining the best readers on earth and tossing us a buck.

Especially in light of the good news:

I'm bursting with excitement to start showing what happens next.

The release date for the first page of "Chapter 13- Fault Lines," is April 4th, exclusively for backers.

Mark your calendar!  In addition to daily art and other content, backers will be getting Volume 5, Chapter 13 updates starting April 4th.

If you're not a backer yet, all it takes is a single dollar bill every month.  If that's a bit too much, you may find a 12 year old cousin somewhere willing to spot you.

The Undisputed Gateway Furry Saga is about to depict things we've never been before.  Thanks to the backers for making it possible.  I'll be sharing all of Chapter 13 with the backers in advance of the Volume 5 hard copy release date.

When the entire book is done (Chapters 13, 14, 15), there will be a Kickstarter to produce hardcovers.

CouchCon 2018 is still coming!  It will line up with the False Start Kickstarter debut, dates TBA.
Faction War testing is yielding massive improvements to the roleplay system- the test is wrapping up soon, bringing us closer to a public release.
Skirmish is on the verge of manufacturing- I just need those darn box art templates!  Then production will be underway.  And though expensive, the game is looking sharp as hell.
Firebrat colors are coming along swimmingly.
Wayward Astronomer and a host of other Dreamkeepers content has been nominated for the Ursa Major Awards- you can only vote during March.
We'll be at Motor City Furry Con this year, as well as Anthrocon.
And because I need to relax occasionally,
new Big Geeky Couch episodes are coming.


Thanks for reading, let's aim for Full Time production so we can all read more.


Conflicting opinions emerge regarding the visually adventurous comic Shutter: https://www.youtube.com/watch?v=6u4Cd7h7-Vw  Check it out, there's room on the couch.
Posted by Dave and Liz at 4:11 PM No comments: 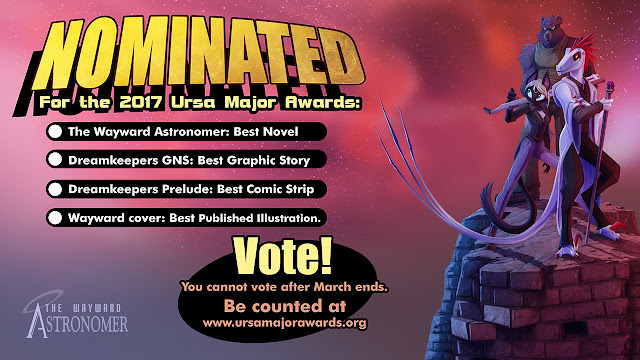 Congratulations to Geo on his nomination for Best Novel- and check out all the categories we're nominated in!
The field is set- now for the battle. Vote and be counted here: http://www.ursamajorawards.org/
Voting is open during March. Thank you to those who nominated us and campaigned for these opportunities- and thank you to everyone who will now give Dreamkeepers a fighting chance.
Posted by Dave and Liz at 9:44 AM No comments: