As always, there were so many fantastic entries that some deserving ones have gone without a prize.  But that's why every contestant wins a Trick-or-Treat sticker- so remember!   E-mail me ( Dreamkeeperscomic*at*gmail.com ) your address by November 15th so I can deliver your winnings.  Otherwise- the trick's on you.    MUAH HA HA HA HA HAAAA!
As for me- I'm signing Volume 4's today, prepping to mail out Kickstarter rewards- and aiming to watch some spooky movies while I do it.
Any suggestions?  What are your favorite Halloween movies and specials?  Let me know in the comments below, and everyone eat some candy and enjoy everything you shouldn't today.  8 )
Posted by Dave and Liz at 9:04 AM 2 comments: 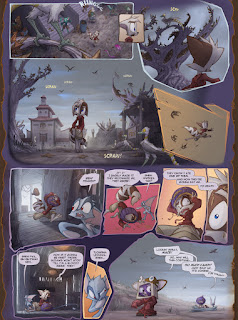 Dave: This Halloween Prelude is inspired by Hitchcock's 'The Birds,' Mace's well-meaning crimes in the previous arc, and studies demonstrating ravens can recognize faces well enough to hold cross-generational grudges. But what puts Mace in greater danger: Scraws, or the integrity of his reasoning processes?

Liz: I thought Whip would be more warey of the whole idea. Where have you gone, Whip of reason?

Dave: I think we're seeing the Whip of opportunism. It's not necessary to believe Mace to enjoy the Mace show.
Posted by Dave and Liz at 5:15 PM No comments:

Comic Feedback: Beyond the Western Deep 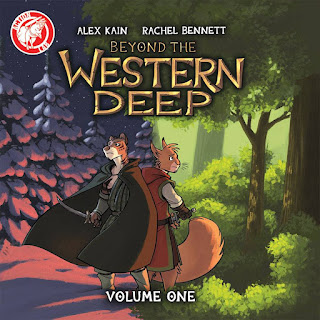 I had a chance to read Beyond the Western Deep recently, and wow.

It's fantastic!  I loved it.  It's rare to encounter an independent comic where all aspects are so well-tuned, and everything is being optimally delivered.

The story is excellently crafted so far.   The groundwork for the world is well laid, setting up the various factions, adding threads of tension throughout.

And the character introductions are excellent.  From Quinn to Hardin, it's engaging.  The narrative has the light, effortless feel that one sees in a gold medal gymnast performing at their peak.   I can only imagine a mountain of work behind the scenes.

The character reactions are organic, believable, endearing:  And yet not a line seems to be wasted, everything serves to construct personality and situation, with subtle (and overt) conflict keeping the reader totally engaged.

Quinn's relationship with his adversarial brother, details like the differing fighting styles unique to the species, the moral quandaries that will soon be facing the lead characters-

The narrative seems to be heading straight for complex gray areas, difficult struggles where the stakes are high- but there's no heavy-handed right and wrong.  This seems to be a story where we can understand where everyone is coming from, we relate to their needs, and yet their needs lead directly to bloodshed.

And the art taking us on this ride- lush!   The style is pitch perfect.  The characters are cartoony yet solid.

They emote magnificently, with a subtle range of emotion conveying exactly the right tone for their lines.

The style feels natural.  The shading on the figures isn't over-wrought, seems airy and minimal- yet everyone seems well grounded in their setting.  Subtle artistry accomplishes amazing results.  And the backgrounds themselves are welcoming.  Detailed without being cluttered, atmospheric without being distracting.

Reading this book for the first time felt like returning to something classic.

If you like the genre of tales like Redwall or Mouseguard, this is one you'll want to check out!

http://www.westerndeep.net/comic/comingsoon/
Posted by Dave and Liz at 10:42 AM No comments:

We've put a bit of thought into it, and here are some guidelines!  While formally we reserve all rights regarding Dreamkeepers, our informal stance on reader created content is outlined below.


*Non-commercial creations
If you're not making money from it, then have fun, and create whatever you want!  I'm not interested in cracking down on anyone for fanart, crossover fiction, motion comics, dubs, what have you.  Derivatives of our work, like memes and AMVs, are also totally fine.  Be considerate of spoilers if it's a new release, but that's about it.

*Commercial creations
Commercial means you're selling content, or earning money from it.   In my mind there are two basic categories of commercial work.   Hand-crafted art, like a clay sculpture, and manufactured art, like a thousand factory-produced figurines.

Either way, we have two limitations:

1)  If you make less than $2,000 in gross sales during a year, then we're fine with it.  Anything more than that, and you'll need to contact us ( Dreamkeeperscomic*at*gmail.com ) so we can sign a full-blown legalese licensing agreement.  We'll ask for a percentage of the revenue which exceeds $2K.

2)  No producing / manufacturing copies of *our* content- because that directly competes with what we might be trying to sell.  But if it's your own art, something we're not producing anyways, go ahead.  Limitation #1 still applies.

*Crowdfunding
We have to drop the hammer on crowdfunding.  If everyone launched campaigns for Dreamkeepers merchandise they wanted to make, there could be Dreamkeepers Kickstarters galore- and I would have no control over whether they delivered on their promises.  People could even use the name 'Dreamkeepers' to intentionally scam readers.   We have to preserve our crowdfunding reputation, so we have to say no to anyone that wants to engage in crowdfunding or fundraising for their own Dreamkeepers content.    I'm sorry, because we've had several requests pertaining to this already- but it's something that could very easily get out of hand.

*Logo
Logos fall in the same vein as Crowdfunding- it is, in the literal sense, our trademark.  If people want to use the Dreamkeepers logo on non-commercial fanart, I'm fine with it.  But when it comes to anything commercial, we would rather constrain use of our logo to stuff actually made by us.

One last note:  Especially on commercial work, please credit us and link to our website.  www.dreamkeeperscomic.com


And that's about it!  Rather general, but I wanted to at least get this out there.  If people want to get commissions of Dreamkeepers characters, make some DK themed merchandise to sell at a convention or something, make some custom DK t-shirts to share with their friends- I think that all sounds fun as hell, and in the end it helps make everything better for everyone.

Any questions, drop them in the comments on the DA post http://dreamkeepers.deviantart.com/journal/Dreamkeepers-informal-licensing-statement-565705011 and I'll get through in a few days to answer them.

Thank you to all the readers and artists who help make this such a vibrant, fun community!  We're grateful to all of you.

The deadline for entries is 9AM Eastern time on Friday, October 30th.

Submit your piece to the DA group here:
http://dreamkeepers-fans.deviantart.com/gallery/56077863/2015-Halloween-Contest

This year features new competition categories- and the return of the Trick-or-Treat mystery sticker!  Every entrant (who e-mails their address to Dreamkeeperscomic*at*gmail.com before Nov. 15) will receive one in the mail.

There are already entries popping up in the gallery, so take a look- and keep an eye out for new arrivals!