Between the Pages: Can we pretend it’s still December? Please?

Because reindeer are seasonal, and well, this is March.  There’s a lesson to learn.

It begins with wanting something that doesn't exist.  Projects always begin that way.  And in this case, the problem was wanting a large prancing white reindeer for the holidays, which seemed like an easy to find item.  But it isn't.

There are large plush by Hansa, there are lit outdoor light shows, but it is very hard to find a large glittery snow reindeer in mid dance.  Even at Bronners, the largest Christmas store.  The nerve.

This little ornament that I didn't make provided inspiration:

As well as one of our readers, Gloves, back in November suggesting “why don’t you make one?”

In tradition of the previous carousel horses, here’s a sketch of the reindeer project: 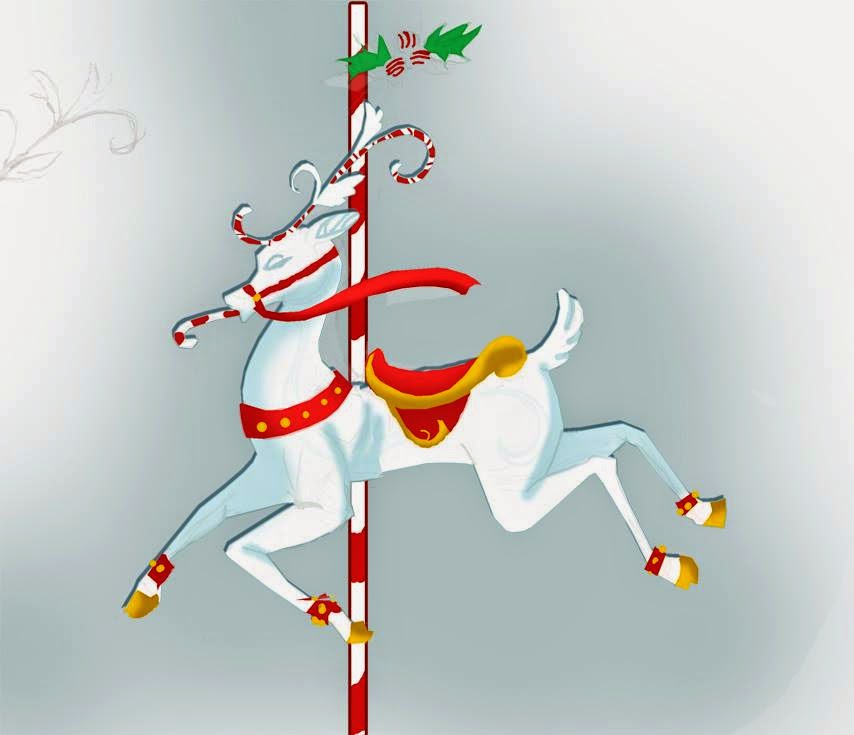 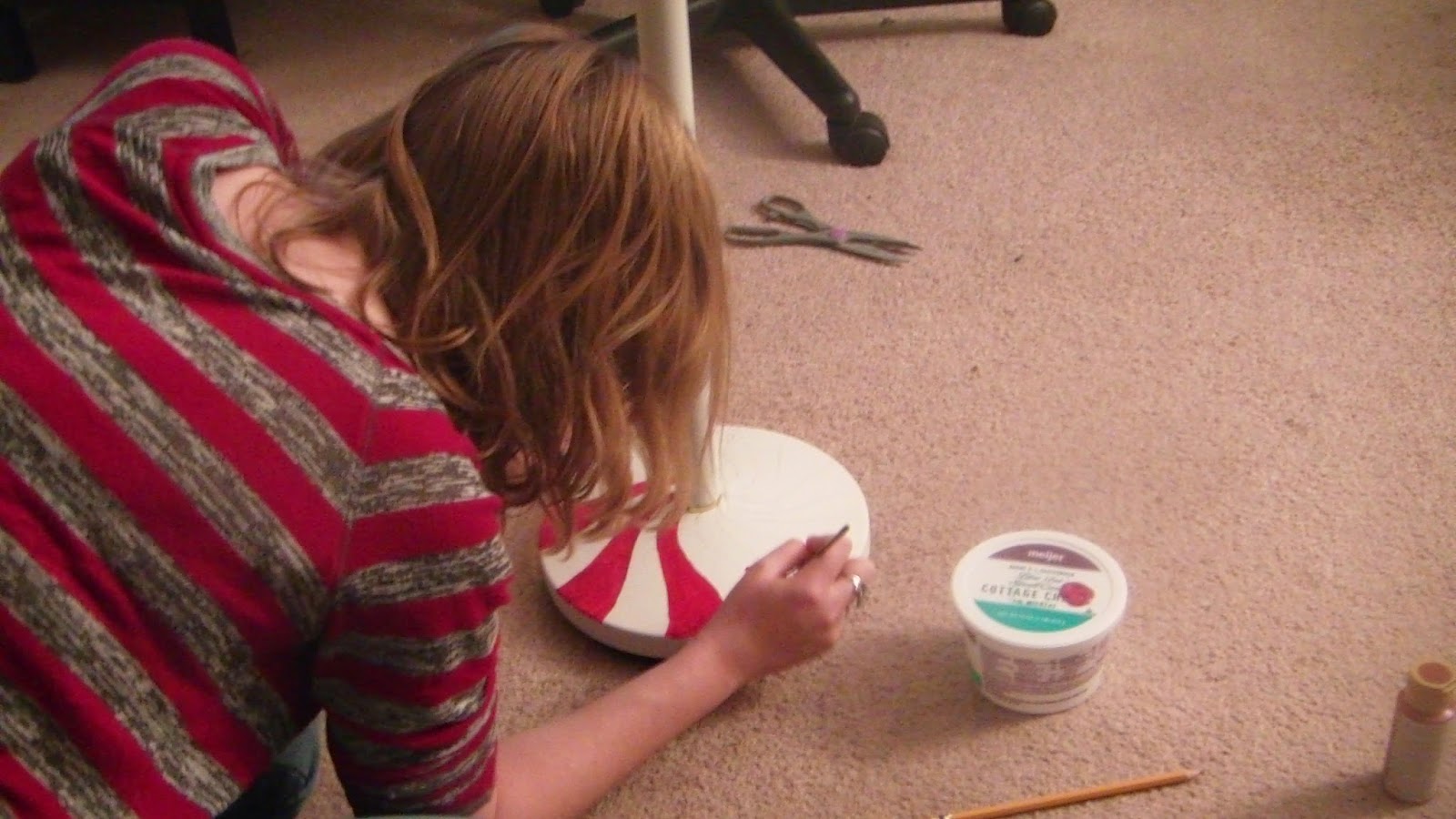 A pattern of one of the sides: 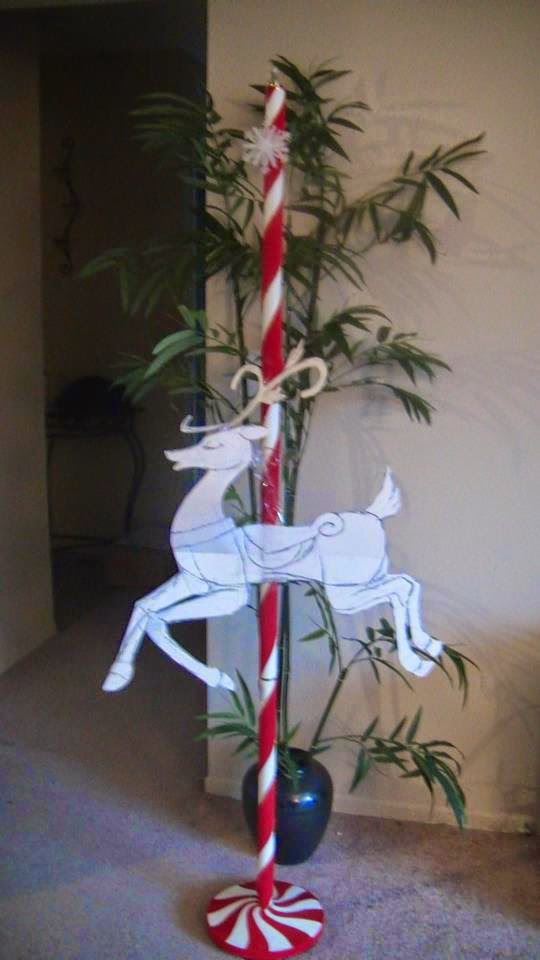 The peppermint pole was inspired by Christmas stools that my Uncle John painted for Aunt Dawn, and was going to light  up.

The foam core skeleton that would be filled with lights, then wrapped in tissue paper to give a rounded form.  The floor lamp stopped working so it became a ‘North Pole’ carousel.  Lights were going to be added later.  The antlers were going to be a clay material. 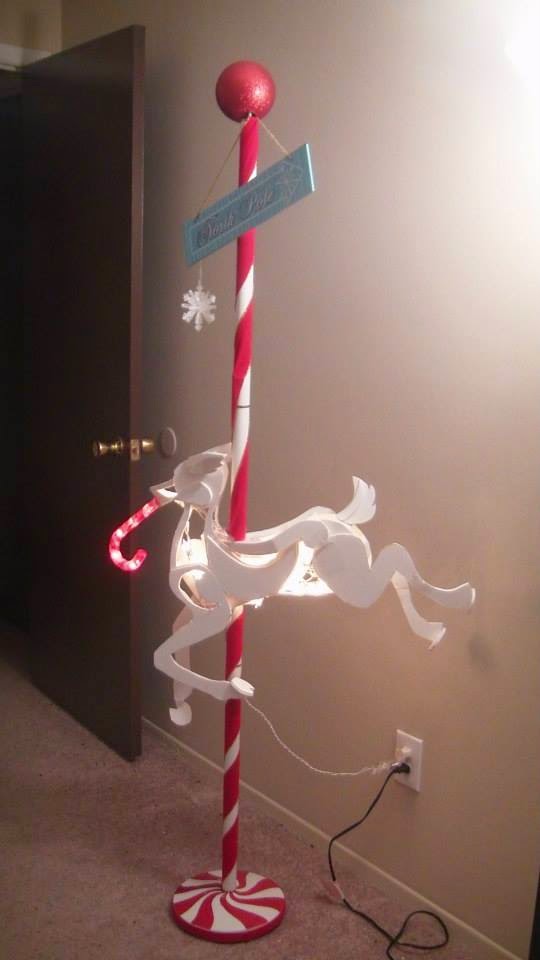 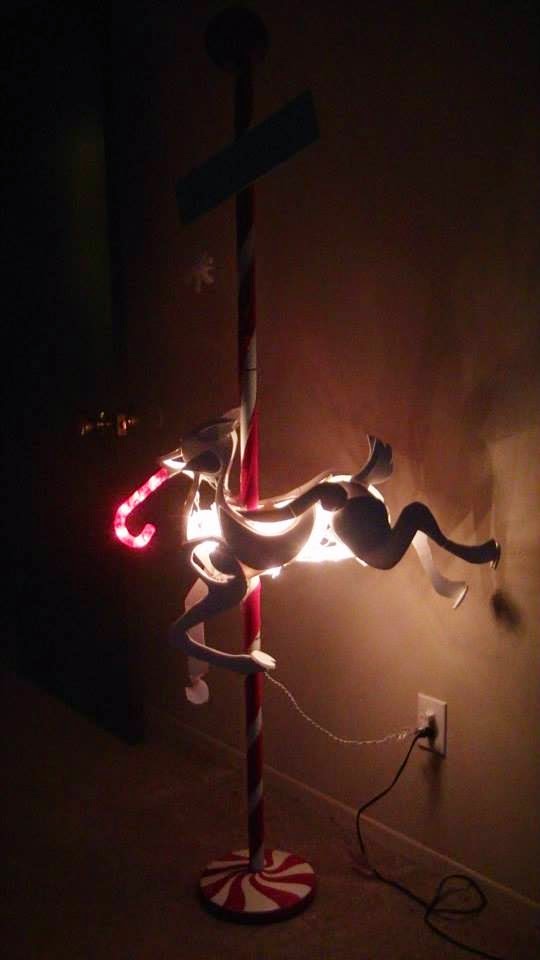 Clay is too heavy to sculpt something this size with personality, I’m not casting silicone molds right now, and paper mache was out.  Mostly, I don’t want to look at this thing once a year.  Or ever.

Unlike the decoys offered in hunting stores, these are a seasonal product, appearing mostly from November through January.  They are called “ blow molds “ or “blowmolds” the idea being that they are hollow, sit outside with an electric light and eventually become a fire hazard.   There are Santas, bunnies, Halloween themed ones, the nativities are popular.  Nearly all were produced in the 60’s and are considered vintage and antique.  The plastic reindeer come from a two piece mold, meaning that their legs are attached together in a leaping motion and can be bought separate of Santa‘s sleigh.  They need a wire or pole to stand up. Ebay, Etsy, and Craigslist are friends. 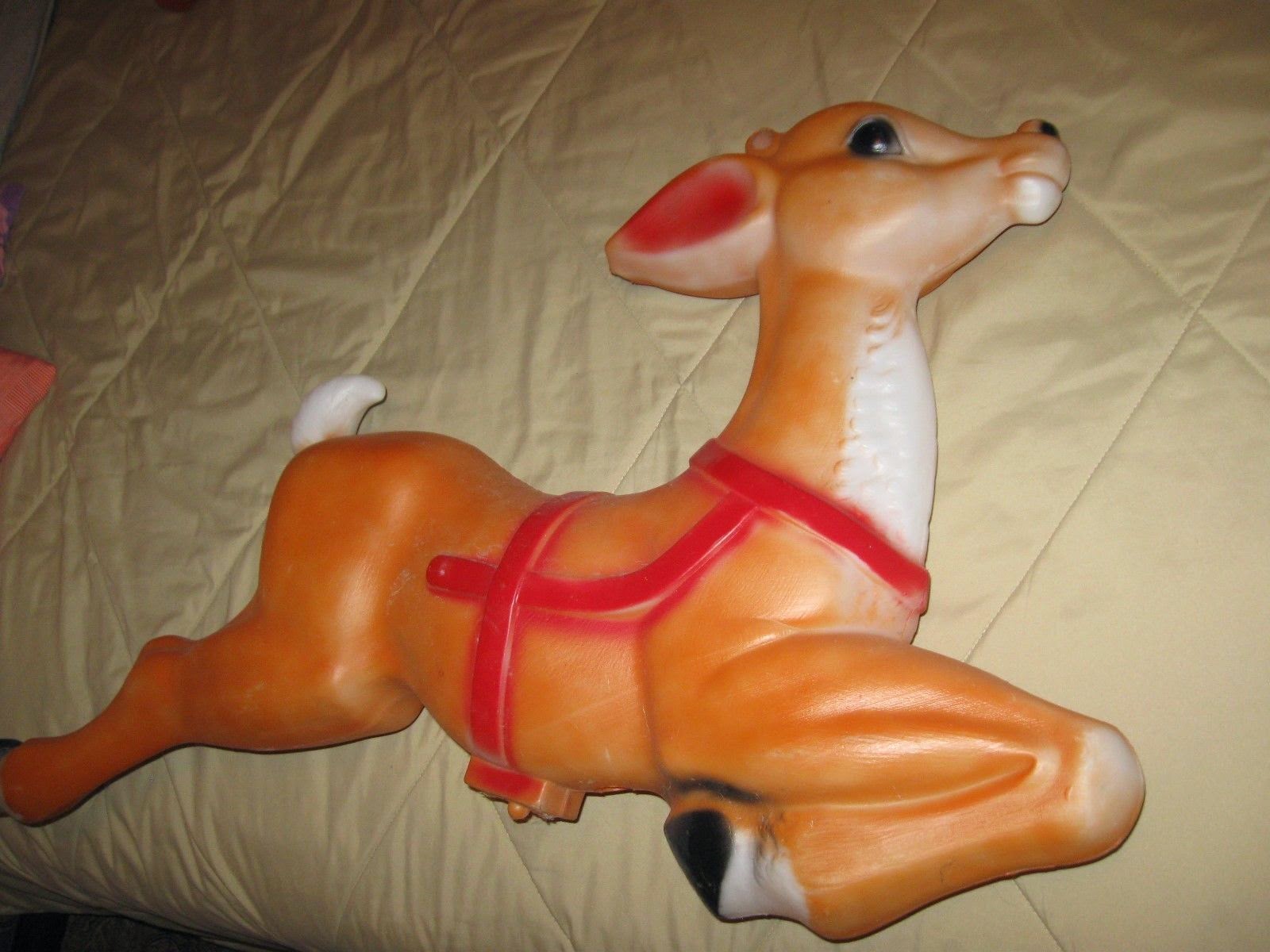 The Poloron reindeer is the most detailed with a fur texture and screw-in ears and antlers.  Their heads are also removable.  I chose this mold (mine is actually Beco, the design was bought later by Poloron) because of the beautiful fur details and the connecting legs don’t look too bad.  The Polorons also connect to a Santa sleigh.  One deer is 36 inches long by 31 inches tall.
(pic used from ebay) 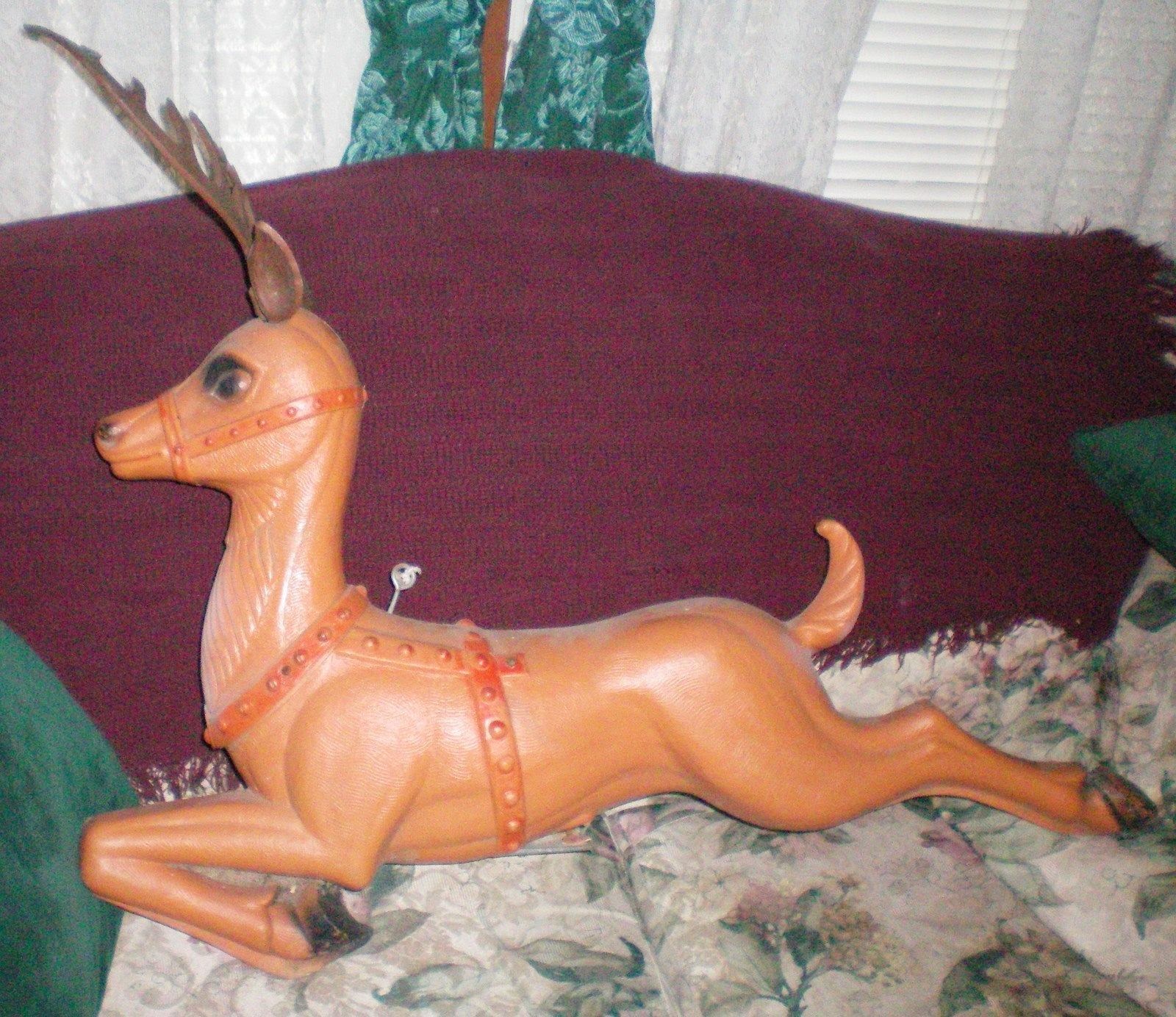 I don’t-I don’t even know what to make of these.  They have creepy faces and amazing legs.  They just popped up on eBay randomly, made in the late 50’s, and vanished.  I would love to try painting these.  Once in a while a blow mold will appear on eBay and nobody knows where it came from.
(pic from ebay) 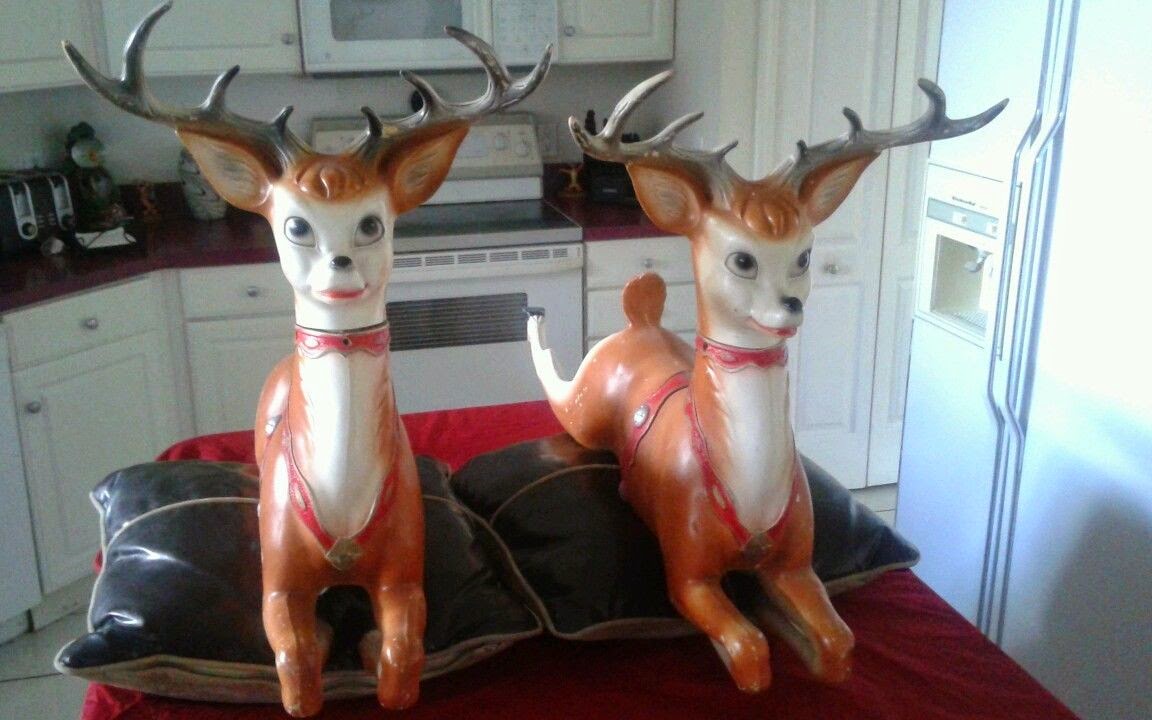 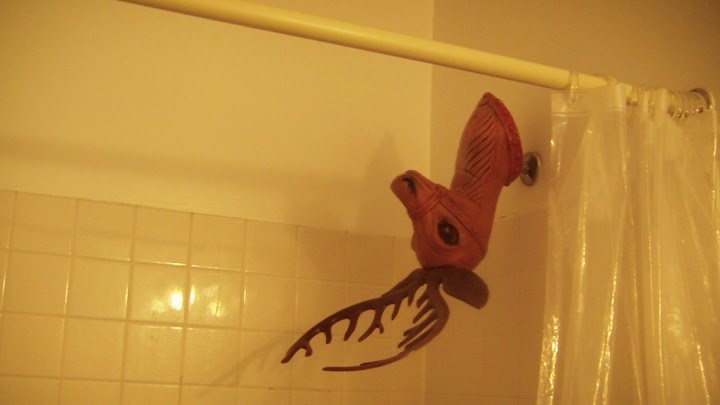 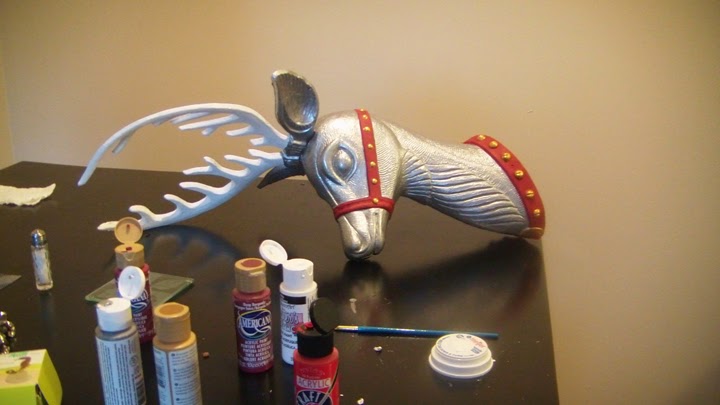 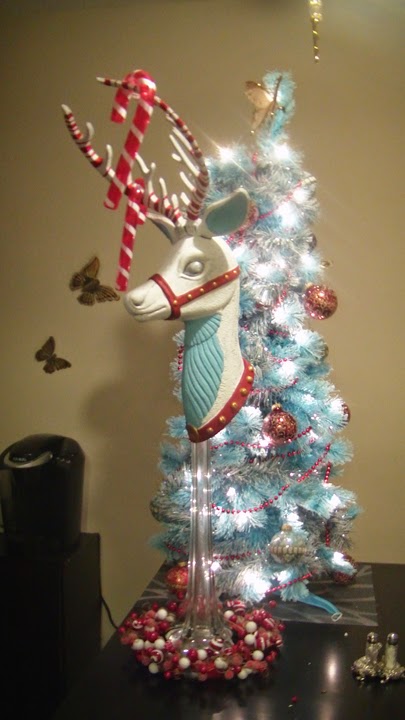 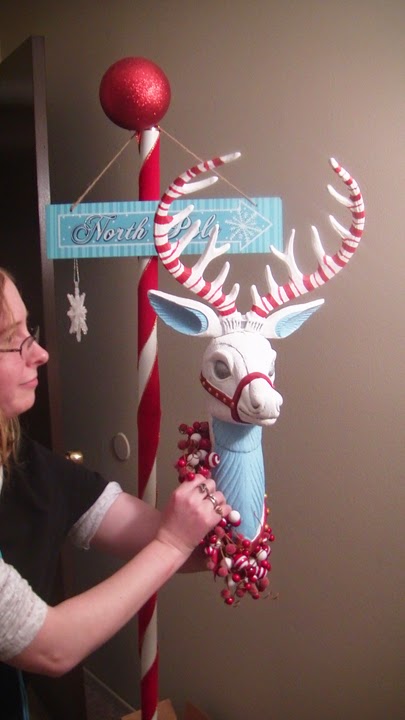 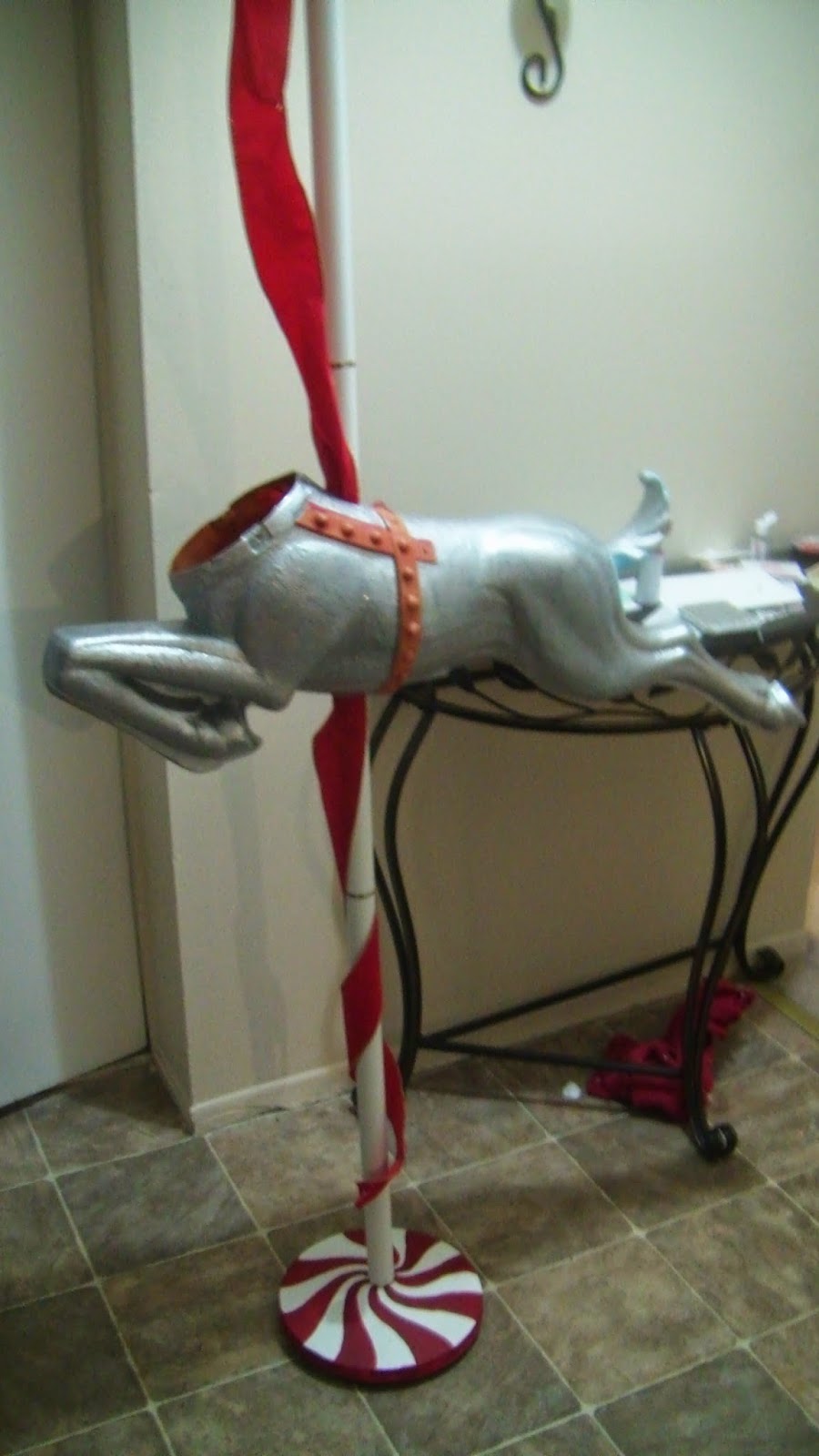 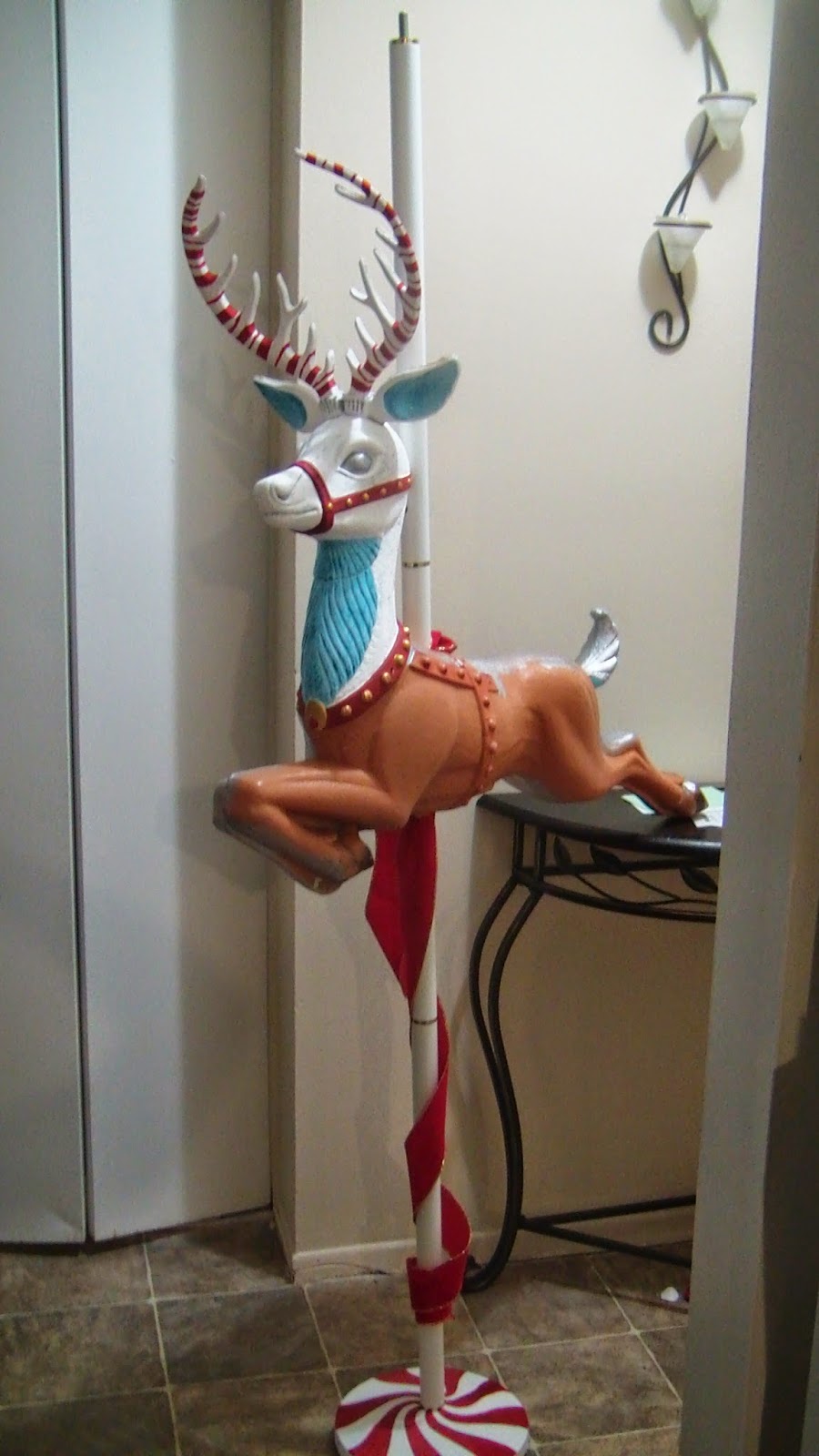 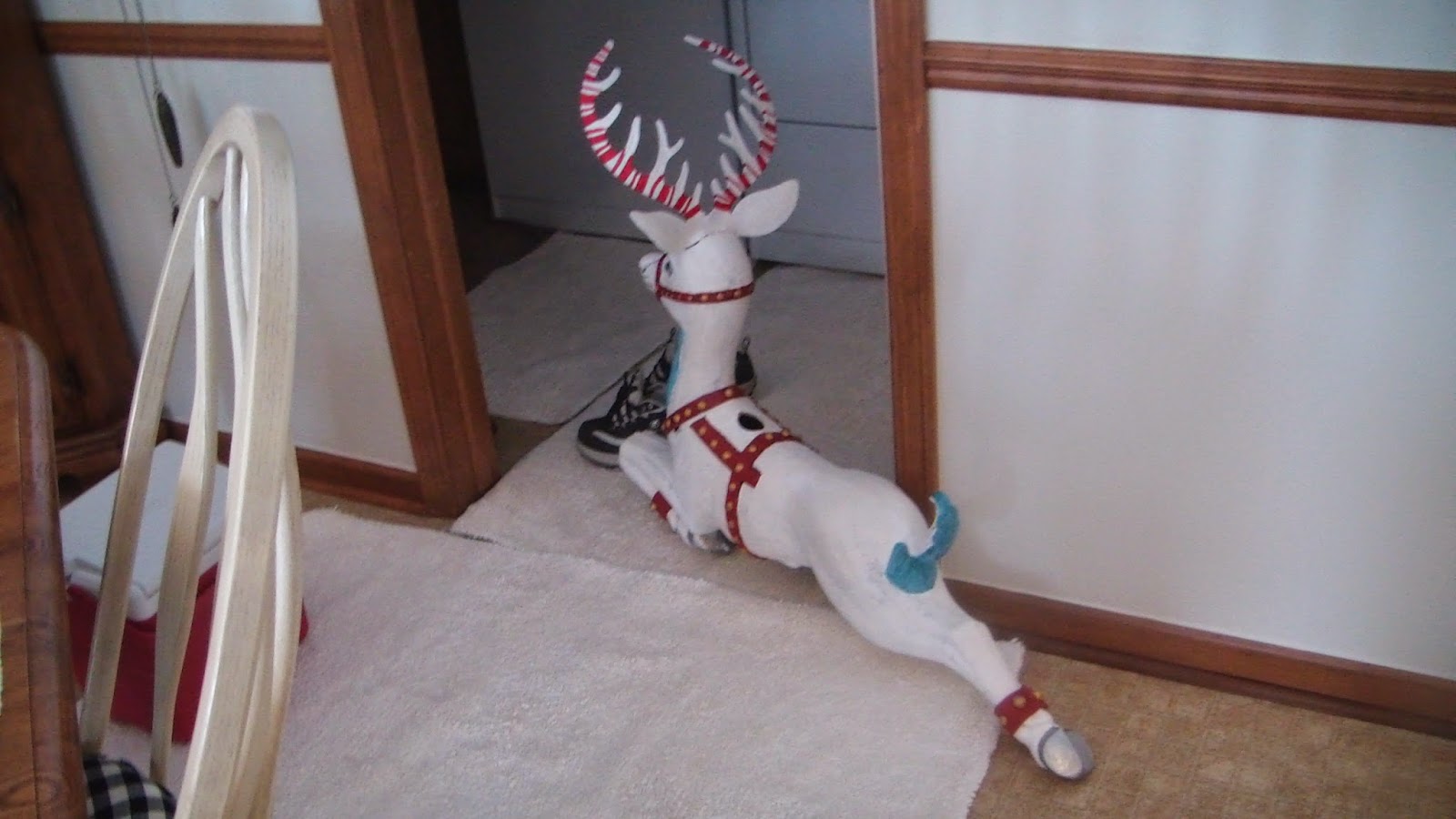 And he's had enough.


I learned that it’s possible to add sculpted pieces to the plastic, like the leg cuffs.  Hobby Lobby has a wide variety of stick on gems and pearls that replaced most of the glitter plan.  Dad’s hardware knowledge was essential not only to attach the pole; the deer’s neck needed special repair with a dowel.  All in all, ’Radar’ became less about a snow reindeer and more of an extended production. 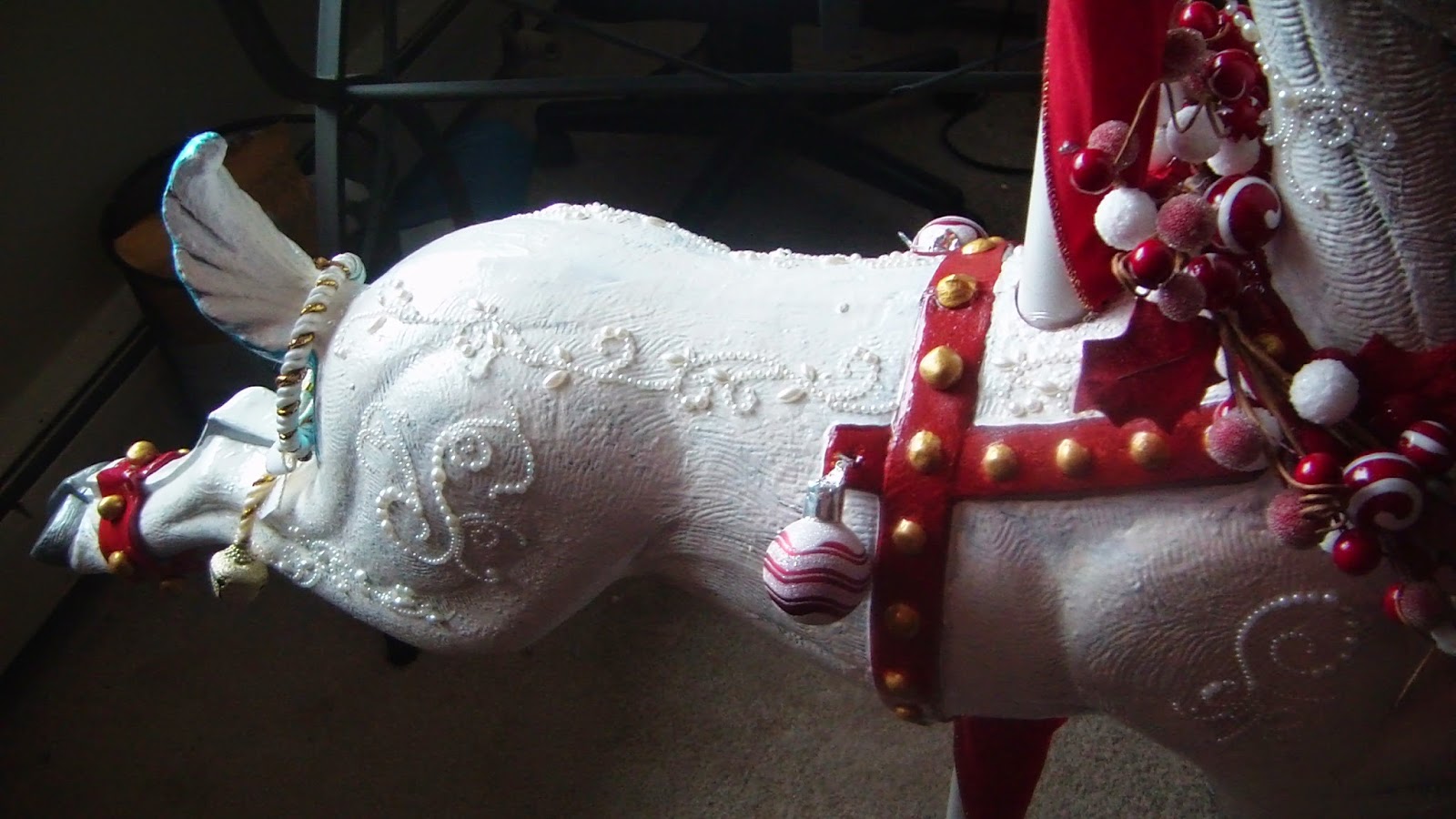 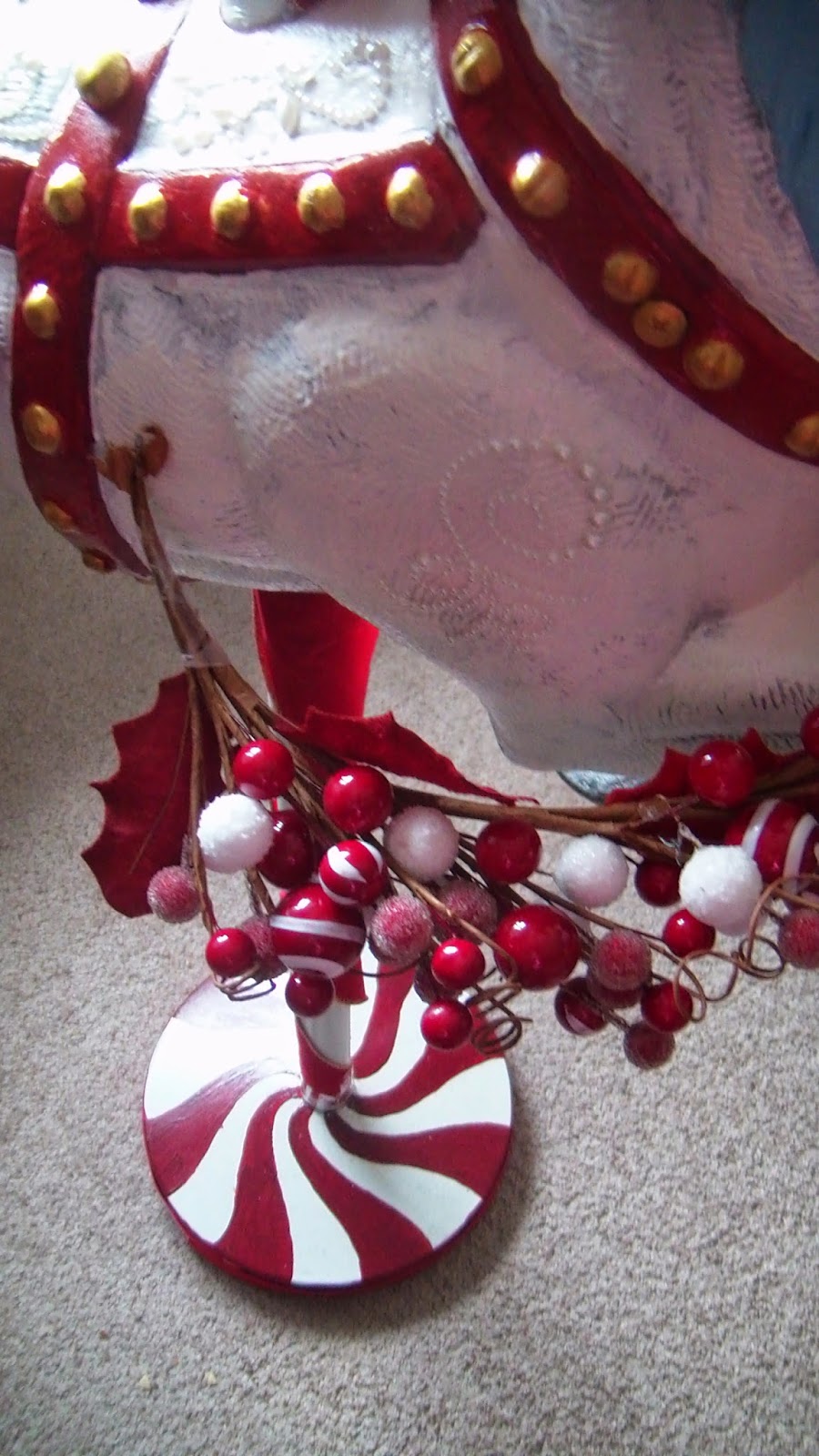 I love red and white swirls. 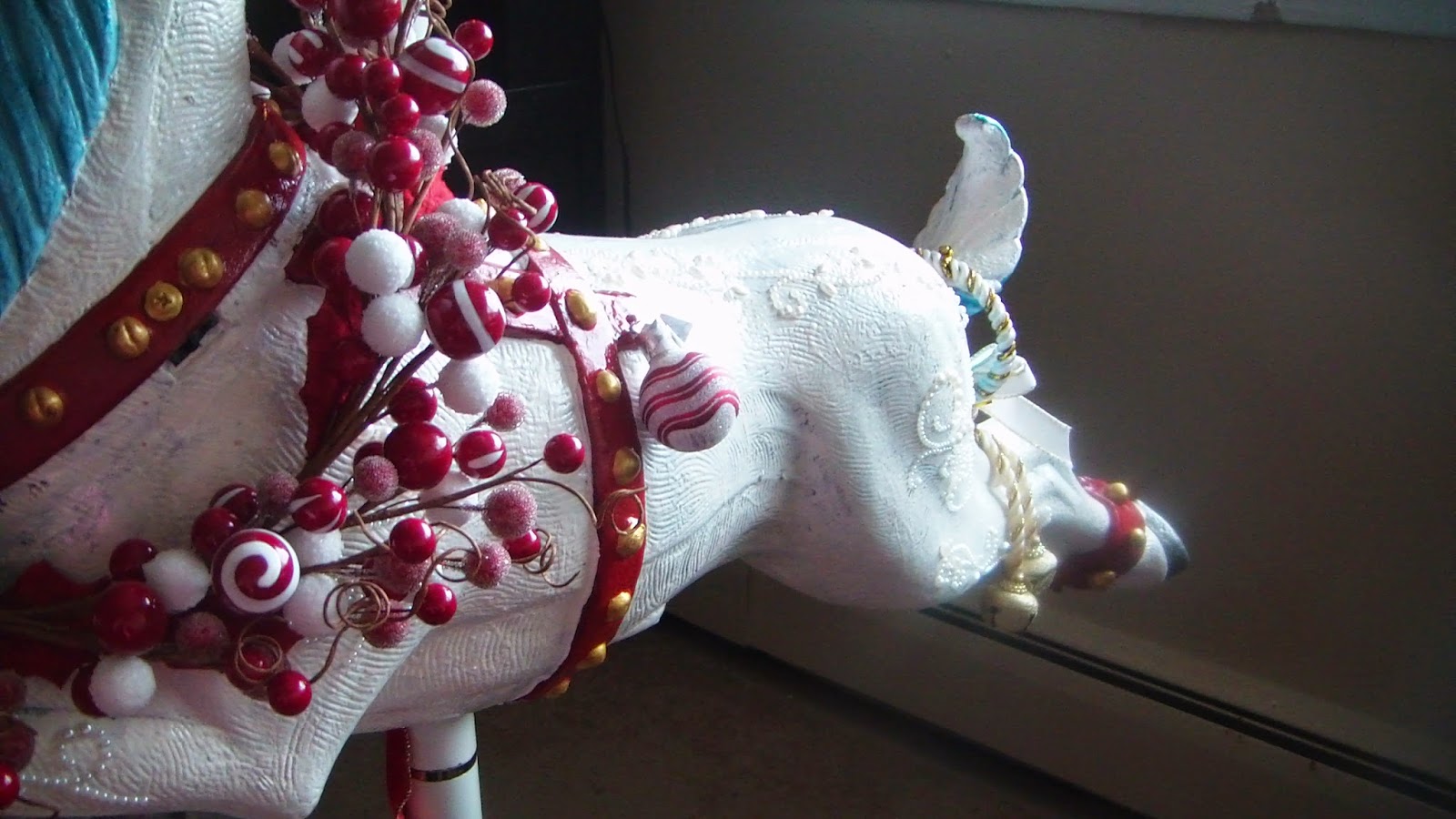 The blue was supposed to be a light accent color, but the glitter matched our little blue Christmas tree (in earlier photo).  The plastic candy canes on the antlers can be replaced by ornaments, etc. 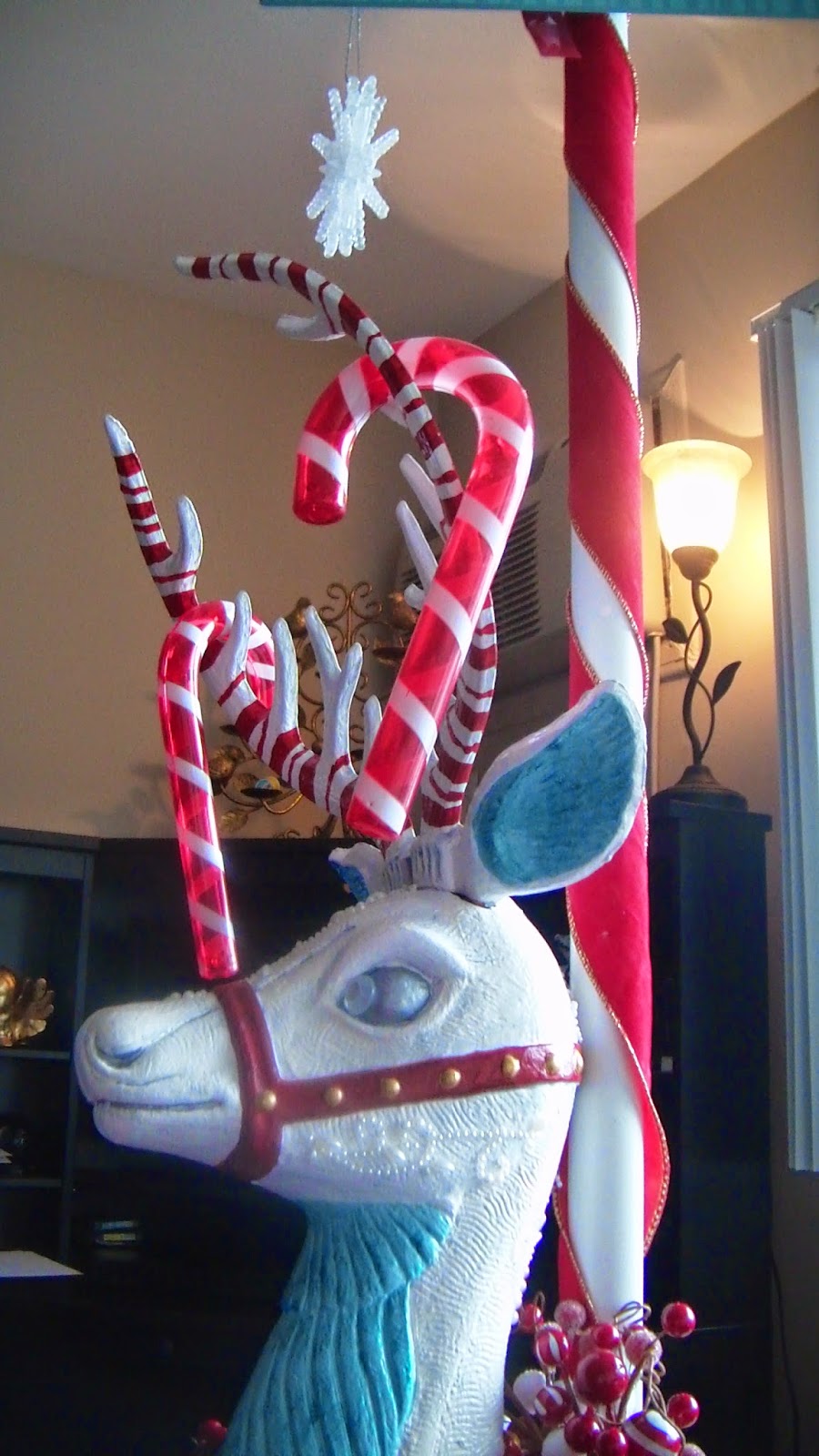 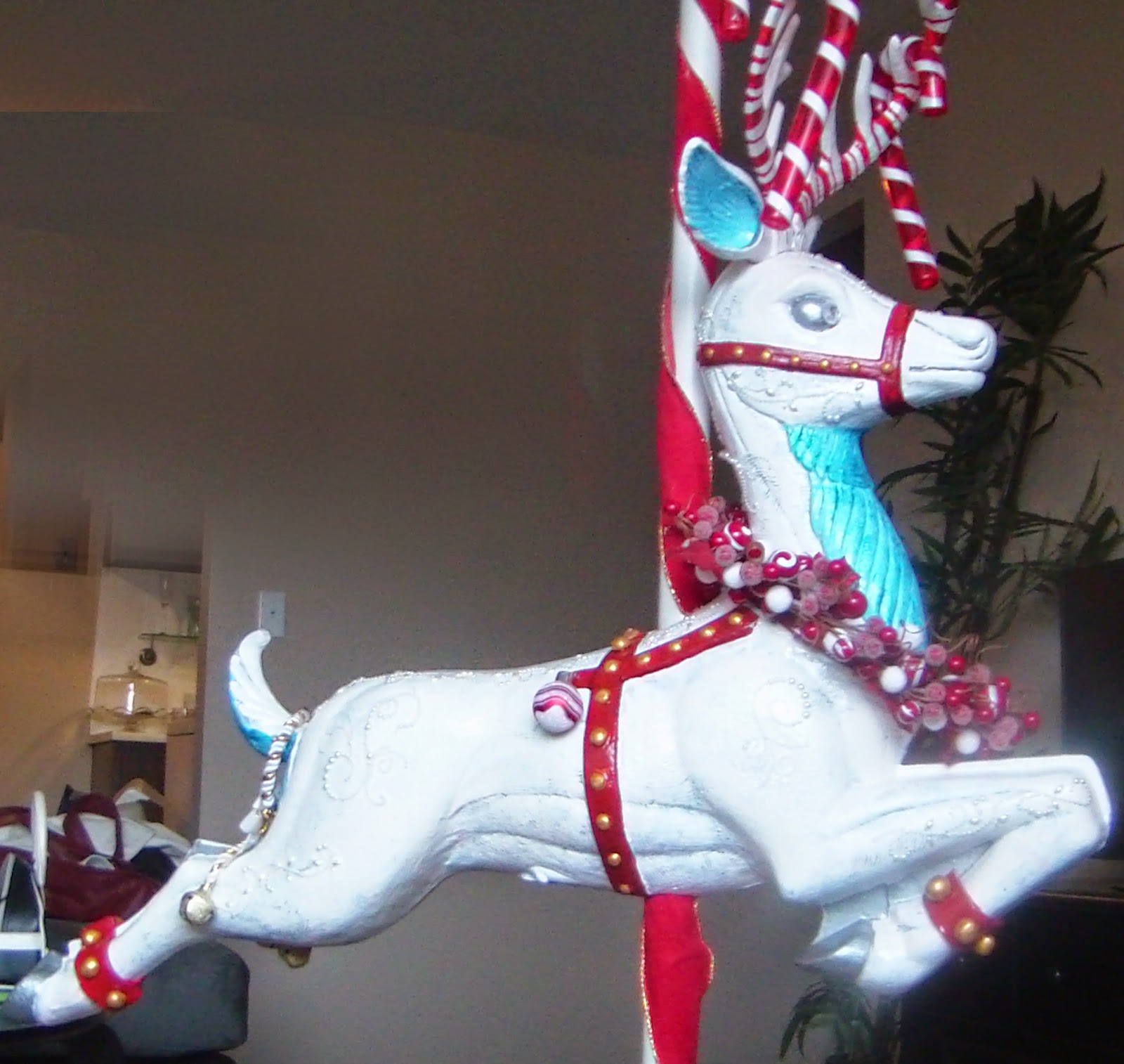 The biggest problem and set back was the timing.
If you choose a reindeer during the right season, you still have to wait.  Without a garage, it’s too cold to spray the needed fixatives until approximately 50 degrees.  And all of the fun bling and sequins can’t be added until that last coat.  The spray will take away all shine from gem stones if added too early.  I thought Radar would be done by December and did most of the bling shopping at Thrift Stores (North Pole sign, unused lights, big ornament ball, snow flake, ribbons, wreath).  I did that part right, at least.  Christmas bling just isn’t available whenever you need it, and is usually one of a kind at the thrifts.  When making a seasonal creature, timed shopping is everything.  That’s the lesson: timing is the key here.  From foam core to little plastic pearls, this came together well, but stretched from November to mid March.  Now I can't even take snow pictures until next year.

It's going to be a challenge putting him away in the summer, I just stopped walking into him in the middle of the night. 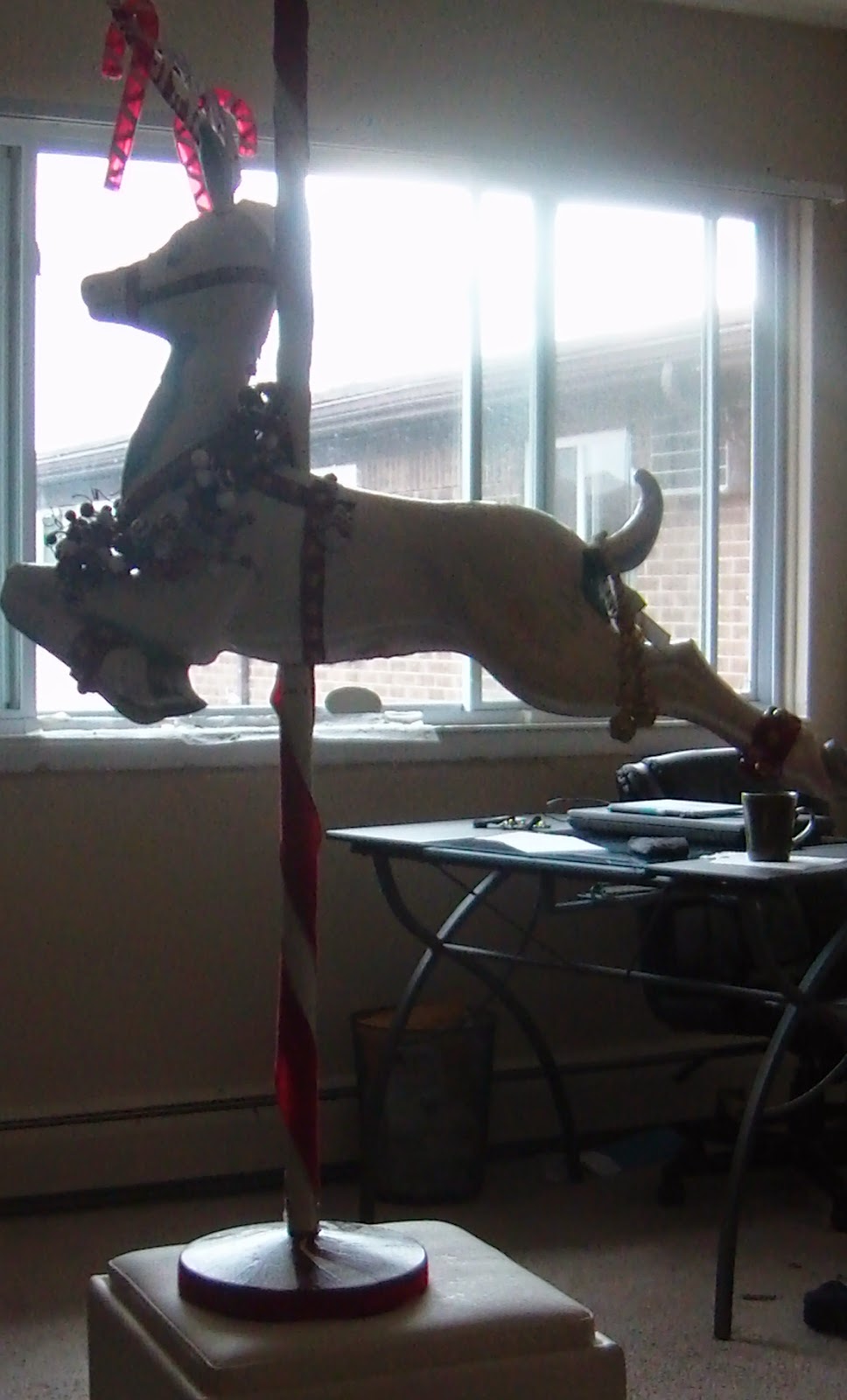 **Where's the lighting??  Unfortunately the blow molds don't glow well after being painted.  There are LEDs and rope lights, but it's all about personal preference and I didn't like how they look.  Even spiraling on the pole was a mistake. 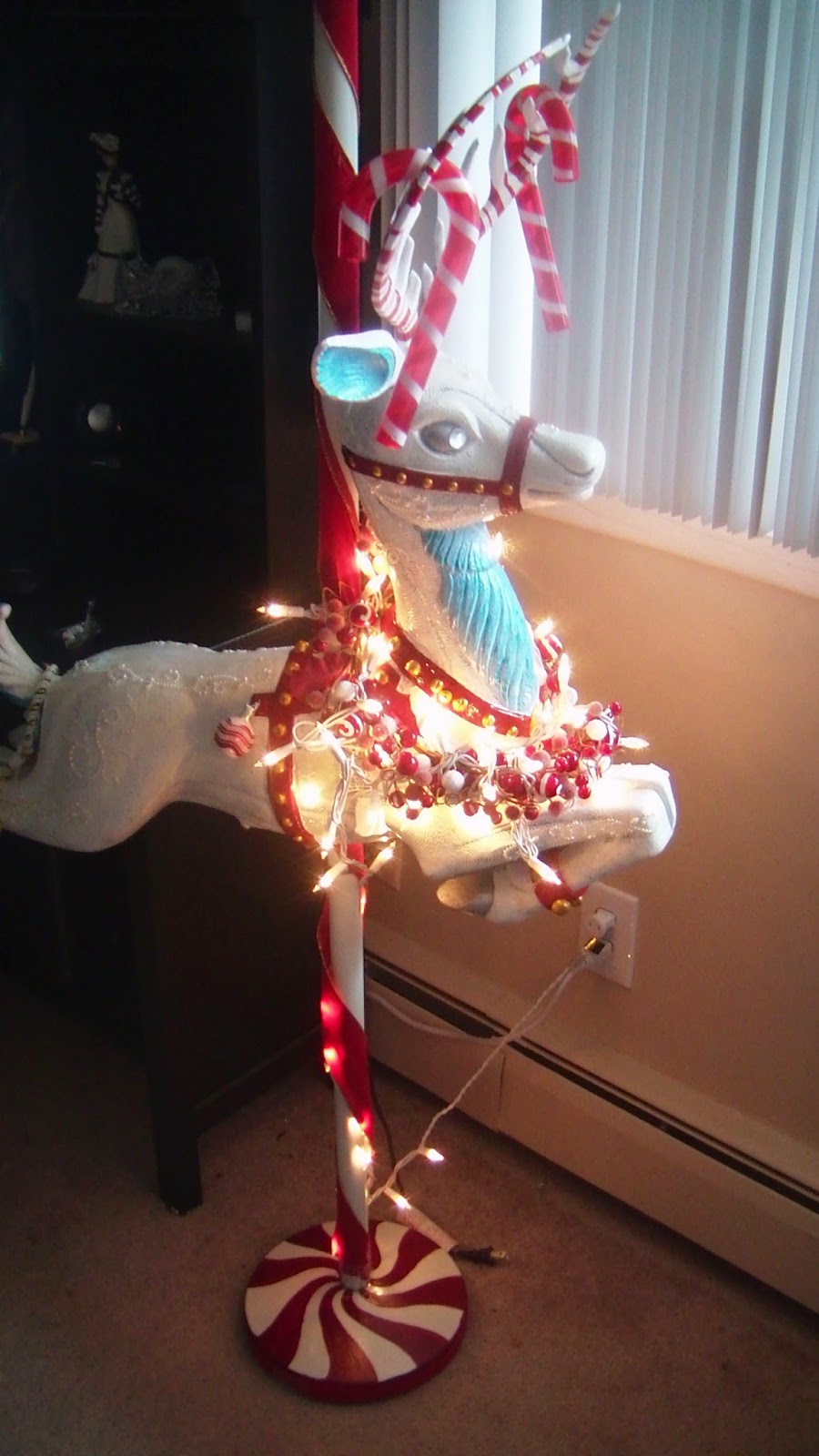 I call this "a mess".
I believe that the piece looks better unlit.

And isn't reliant on a wall outlet.
A late TA DA.  Now I have to wait nearly a year to take snow pictures with the deer.  He will go into storage until November.  I'd love to paint more deer with themes or the colors gold, or red and green holly everywhere, but now it’s time for a moment to visit Cabelas.  Check out their deer, maybe look at some plastic ducks or something.