We've had some queries about exactly how the tournament works, so I'll break it down.

All you need is a keyboard and your imagination- no references, illustrations, or other assets required.

Read our legalese on the registration page and submit your info, including a valid e-mail.  The big thing to include:

A concise, compelling description of your character- 300 words or less, and it may include one html link of your choice.

Remember these battles are based on audience votes.  Only the most captivating character will prevail- so make your description count.

I'll publicly post your character name and description when we announce Bracket-1 matchups, so you'll be able to read all about the character you're facing off against.

Then it's time for a war of words.

I'll e-mail asking for your battle text:  In 300 words or less, describe what happens in the fight.  It can be anything that you think will persuade an audience to take your side.

I'll post your battle text alongside the battle text of your enemy- and readers will have 48 hours to vote.   The battle text with the most votes wins.  The loser is eliminated from the tournament, and winners go on to Bracket-2 battles.

(After December 8th, I'll post a sample battle between Mace and Ravat, with voting, to give an idea of how it all works.)

Bracket 2 works the same- I'll again post matchups, and again e-mail asking for your new battle-text against your new enemy.  And we'll repeat until the final battle, when two victors duel for ultimate supremacy.

I'll draw the winner's character on one of the battle cards in the upcoming Dreamkeepers card game.

*One registered character allowed per person.

*We reserve the right to decline to post any text entry or link, and will explain our reasons if we take this option.  If we shoot an entry down, we'll give you two chances to submit a different entry.

*Battle text may include maximum one HTML link- which enables you to use illustrations, videos, or other media if desired.

You can make or commission other artwork, stories, or promotional content at your own discretion if you think it will help drive more support for your character.  Use the #Dreamkeepers hashtag on social media to taunt opposition, promote your character, and deploy tactical memes.  Tag me in and I'll share content if I can stay caught up.

Any final questions, fire them into the comments on DA: http://dreamkeepers.deviantart.com/journal/Tournament-Registration-and-Rules-648436834  We'll work with the winner on the specifics for their card art- thanks to everyone for checking this tournament out! 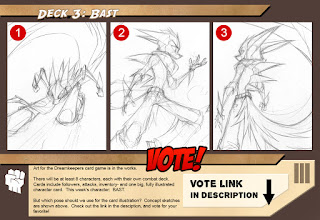 Itching for a fight?

Sharpen that axe, load those cartridges, and fire up your power.  It's time for the first ever Dreamkeepers OC Tournament.

Battle will be waged with scathing descriptions, urged on by the bellowing roar of the arena.

Gladiators square off in 1v1 matchups.  Each player submits a 300-word description of their action to us.   Then we'll host an online vote, and give spectators 24 hours to choose the victor.

Which warrior is the most brutal?  Cleverest?  Funniest?  Most sympathetic?  Make your case on social media to gather the momentum for ultimate victory.

The champion gets to have their character featured on one of the cards within the upcoming 'Dreamkeepers: BRAWL' card game, and also wins a free first-edition copy of the game.

We'll announce the schedule for Bracket-1 fight dates in early December, after collecting the entrants.  Here's how you enter:

Keep an eye on our journal- we're getting an automated form ready, and will post the link when it's set for entries.

Enter your character before December 5th to join the tournament- and to the victor go the spoils.

Also, this week we're announcing the next character to be featured in Brawl- Bast.  Vote on your favorite pose for the card art here: 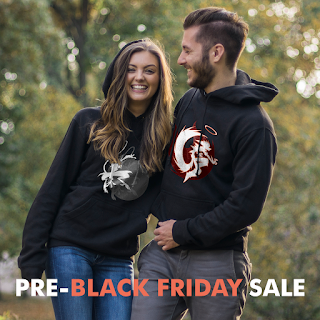 TeePublic sent me this photo- if this is you, BEWARE! You're being stalked by a merchandise company.
https://www.teepublic.com/user/dreamkeepers
Actually, it's an advert for their Black Friday sale- running November 24th through the 29th. I'm impressed that they're proactive enough to send me a promo image. E )
Posted by Dave and Liz at 7:20 AM No comments: 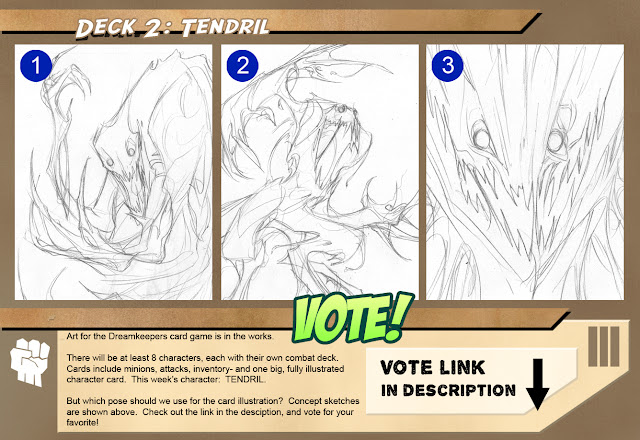 The next character entering the fray in the upcoming DK card game- Tendril.

A rhyming bloodthirsty slimeball, whose sadistic resolve is matched only by his delusions of poetic grandeur.

Which pose should we finalize for the card artwork?  Vote for your favorite:

And in the DK Chat last night, we revealed a new contest in the works- a massive original character tournament, open to all.

The champion will have their character featured on a minion card within one of the decks.

The game is still being designed- but it will likely be a text-based vote battle.  There will be one-on-one versus matches.  Each player writes, in 300 words or less, the action their character takes.   Then the readers vote on the craziest, cleverest, or overall most entertaining submission- the winner proceeds to the next round where they battle other victors, until one lone warrior prevails.

Should be a slew of entertaining action, a gladiatorial extravaganza where the roar of the audience determines ultimate victory.

More details coming next week.
Posted by Dave and Liz at 4:04 PM No comments:

The guys at SlackJaw Punks are giving away a Dreamkeepers Volume 1 book- but there's a catch:

If only they had selected something the internet was good at.

Enjoy the contest, best of luck, and check out their podcast if you want to delve into the twisted minds of people who solicit insults.
Posted by Dave and Liz at 9:04 AM No comments:

You Know Where to Stick It 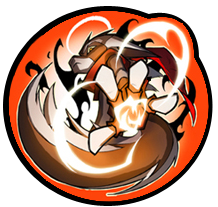 After years of scarcity, stickers are back.

Mailing merch was cutting into my drawing time, which is why they were pulled from the store for so long-

But then along came a Ferrous.

He's tackling the Sticker Biz singlehandedly- and just in time for the holidays.

So if you have a burning need to slap color onto something, this is your lucky day.  Stick responsibly.
Posted by Dave and Liz at 6:50 PM No comments:

Strap in- the game designers field some questions about the upcoming Dreamkeepers card game.   Got more?  Ask away on twitter:  https://twitter.com/DKBrawl

Q: Will there be more than one game mode?
A: We have prioritized polishing the normal game mode, to ensure that it is as fun and balanced as possible. However, we have experimented with different game modes and are hopeful to include them eventually. If you'd be interested in unique 1v1 play modes, or even a 2v2 game mode–let us know on Twitter! @DreamkeepersCCG

Q: How many cards are in the base game?
A: The base game will contain a minimum of 168 illustrated cards.

Q: Can you confirm which characters are playable?
A: We will be revealing one character each week during Dave's Thursday community chat. So far we have revealed that both Tendril and Igrath have their own decks. 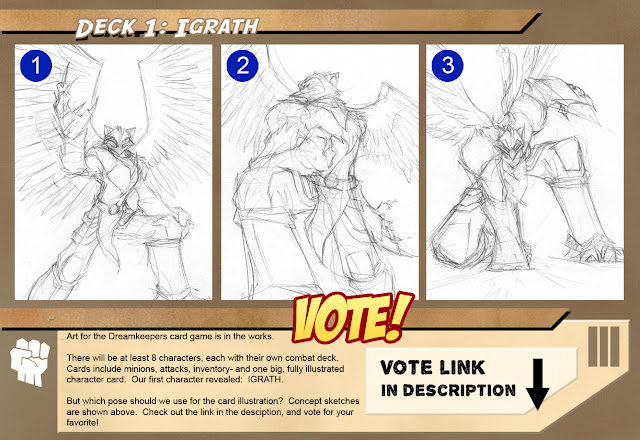 The card game is in the works- eight characters will be plunged into bitter combat.

Each week we reveal the identity of the next warrior- today's revelation, the first into the fray:

Commander of the Troika, veteran of the Toll Wars, and fugitive ex-Captain of the City Guard.   Igrath's boisterous might is tempered with experience, and the iron will  necessary to command an underground military organization.

What evils will he face in the card game?  Find out next week.

For this week, we need your vote!.  We have three drafts for the artwork of the Igrath character card- and you get to decide which one makes the cut.

Vote here:  https://docs.google.com/forms/d/e/1FAIpQLSe8guTacG2NWjXToRbjnzxq5b68p_wHO18ZFK56LpeDLkLJlQ/viewform
Posted by Dave and Liz at 12:44 PM No comments:

On the latest Comics-R-Kewel podcast, I chat with Chad 'n Bob about that perennial topic....BAD WRITING.  http://slackjawpunks.com/comics-r-kewel-ep-28-cant-think-of-a-title-feat-cullen-bunn/Learn how to avoid the Kryptonite of comic writing...  Or at least listen to us shriek about it.
Posted by Dave and Liz at 10:53 AM No comments:

It's been brewing behind the scenes for months now- after hundreds of hours of playtesting and meticulous development, we're ready to share some preliminary news.

Developed by Spencer Brower and Michael Crossen, it's a character-based battle game.  Every player commands two characters, each with a unique deck and tactical style- making for a myriad of strategic combinations.

The table itself is split into three zones, giving dimension and variation to the gameplay.

Balancing and further refinement is underway- but an early 2017 Kickstarter is looking solid.

So to kick off our updates, what questions do you have?   Hit us in the comments!   Curious about character selection?  Gameplay?  Features, Kickstarter extras?

We'll also set up an outreach program to help us connect with your favorite game shop, so watch for news on that front as well.

Fun is in our future.
Posted by Dave and Liz at 7:20 PM No comments: