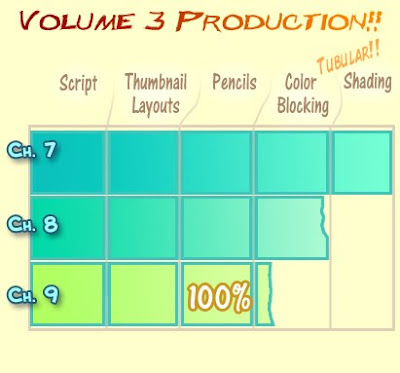 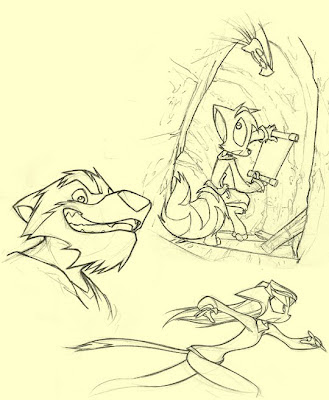 ...After working on V3 pencils for so long, it almost doesn't seem real that they're done. I started page one in... Checking planner... Damn. 2009. Rodmonsters. I feel a compulsion to launch into an explanation of why things have taken so long, but let's save that for when the book is actually finished. For now, I just want to savor actually hitting a concrete milestone, one that proves The End is Nigh, and show some more pencils. 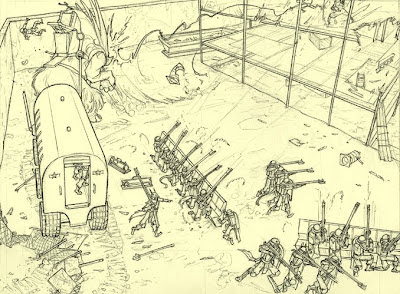 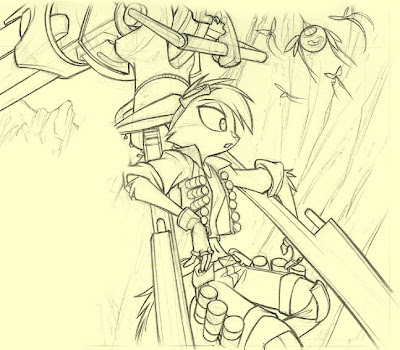 ...And I know I already tossed some of these on the Prelude off-week updates, but PSHOUGH. I wanna show 'em again. 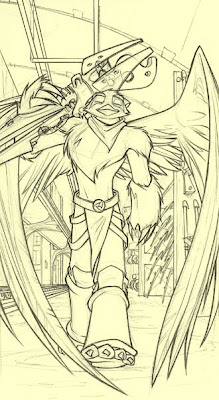 A lot of the scenes required more than drawing- I frequently had to stop to put some design into the settings and props. Granted I'm no engineer, and my doodles wouldn't stand a hope of being feasible in reality. But I don't want to just thoughtlessly draw crap in in a fire-and-forget fashion as I blow through the book. I want to make things... Make... Sense. Like they look the way they do for a reason. I feel like the extra effort helps make the Dreamworld, within it's cartoony premise, feel more coherent and believable. For example, here are some of the doodles for the prop we gave Igrath in the above drawing: 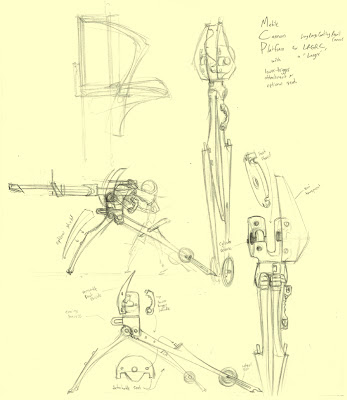 The rear legs are longer to better absorb shock from firing recoil, so the thing doesn't risk tipping backwards after a heavy salvo. For hard-post sentry situations, there's a seat attachment. The flak shields on front are detachable, so if they can be replaced rapidly if battle damage renders them ineffective. There are also slotted retractable wheel mounts on the rear legs, and a front harness mount. Why would a weapons platform need a harness mount, you ask?
Ha heh, questions... Moving on. 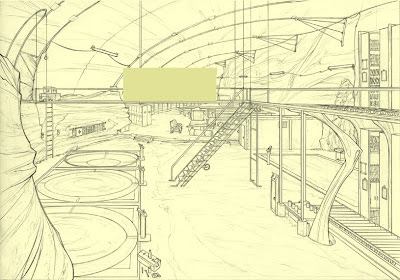 Settings especially can require a lot more planning than meets the eye... This installation in particular required a complete top-down design before I even knew where to begin drawing. Also, I would like to point out that the staircase is collapsible and modular. Why build a staircase that can never go anywhere else? 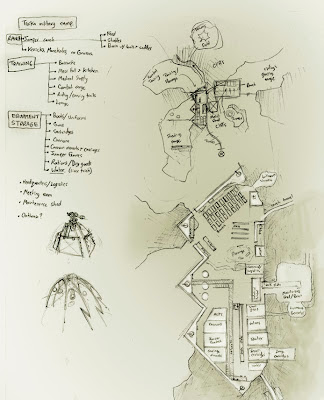 The zig-zag outer wall design is reflective of military emplacements from the days of seige warfare. When the enemy is crowding against the base of a wall using it for cover, the angled wall system allows the defenders to continue pouring fire on them. I also tried to put some thought into a base setup that accomplished the main goals of the installation, one of them being storage... For example (This doesn't come up in the book, but I just thought it was cool) The springer cartridge storage area is flanked by water storage, so in the event of an accidental cartridge discharge, there's a natural barricade minimizing damage to the surrounding areas.
...I would like to imagine that our long production time on the pencils was due to all this fancy design development, but actually our production rate in past months is roughly double the average we had in years previous.
Switching Prelude from weekly to bi-weekly has, admittedly, been exceedingly helpful to V3 production. Additionally, notching the Joe Job from full to part time has helped incredibly. This ought to mean I can retain the fast pace on coloring, meaning the book will be done this year for certain! 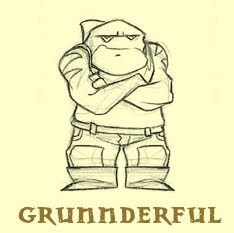 Oh, also, I drew Grunn. Um, he took a lot of high-level design concept stuff too. In depth.
So the Volume 3 pencils are done. How close is the book to being actually, completely finished?
With pencils done, we just need to color the thing now.
The colors, both blocking and shading, are already finished on Chapter 7. The color blocking is nearly done on Chapter 8, there are only 4 or 5 pages which aren't fully blocked. Blocking is already started on many Chapter 9 scenes.
So, I need to do the shading on Chapters 8 and 9, and the blocking needs to happen on Chapter 9. After so long working in black and white, I'm thrilled to start making things dark, and shiny, and glittery, and chromatic, and-
But, alas, I have a few things to take care of first.
Before I jump into the shading blitz, I have to:
*Restock our Prelude que- don't wanna run out of updates.
*E-mails. I think there are about a zillion.
*Commissions. 7 and 8 are done, but it's time to get rolling on 9 and 10.
*Finances. Running a business requires keeping track of all sorts of businessy things - eSPECIALLY when it comes to taxes. What, you thought it was possible to draw some comics and sell them without paying off those people who didn’t contribute to any stage of the work- bureaucrats? Insert rant.
*New File Backups. I had an account with Megaupload where, after months of uploading, we carefully archived our DK files- until I took an arrow to the knee. And by arrow to the knee, I mean the federal government deleted my backups because... Hold on, there's a reason I'm sure. Because other people were sharing music files or something. I don't know. All I know for sure is that the people responsible for deleting Dreamkeepers have much, much more generous pensions than me- and their comfort is funded by taxes on my struggles for productivity. Regardless, I need to get our files backed up somewhere else, because I won't risk losing years of work to a hard drive crash. Let's just cross our fingers and pray nobody shares a Britney Spears song via the company I'm archiving with now, or all bets are off.
FIGHT THE MAN! Because women are scary.
Anyways, last task that needs wrapping up-
In the course of advertising on Youtube, I learned that one can promote a video of any length, it doesn't have to squeeze into a 15 or 30 second timeslot, the way traditional commercials do. So I'm tacking some extra content onto the end of our commercial before we fire it up again. Now, don't get your hopes up- more epic animation is not on the way. Do you want me to finish Volume 3 or not?! It's just a few extra minutes of persuasion, with some drawings added in to avoid a boredom-inducing blank rectangle. So nothing terribly fancy- because if it were terribly fancy, it would take too long, and I have a book to finish.
Thanks to everyone for keeping up with us for this long- we’re getting there!

What paper do you use, and what pencil leads? Thanks in advance.

Actually, your stuff is still on the megaupload servers. So it's not gone, just in limbo. Which is effectively the same thing. Here's hoping you get it back

Some insight into that mess :)

If you are really looking for backup space, I can set up my pogoplug drives for you to use. I think I need to set a folder as collaborate, and I'd need your e-mail address.

Just so you know, you won't be getting good speeds if you use me.

I've used Dropbox in the past to keep things backed up. It has the benefit of being pretty much "set and forget". I just set it up, and then everything I put in my dropbox folder gets uploaded and stored online automatically.

It's not the most secure solution in the world, but it's enough.

Anyway, glad you're done with pencils. After working on it for so long, it must be nice to reach that milestone.

Congratulations on reaching 100% with the pencils. I can't wait till the next update. Good luck reaching all your goals.

I would recommend Box or SugarSync online storage which I'm currently using myself. Both offer free 5gb personal storage but currently 50gb free is still on offer in Box if you sign up through Android.


SugarSync is better in another way because it has a synchronise feature(like the name says) where you just select which folders to upload and it'll settle the rest. I don't know exactly the size of your stuff so this is a little help for u. Losing your precious data is sure a heart ache. But since your drawings and all are business y not go for a business account? It would definitely meet your storage needs for a long time.

BTW, grats on volume 3 development. Love your work. Keep it up forever ^^

I'd suggest picking up your own terabyte external storage. So worth the 150$+ one would spent on it.

I prefer never to let have someone have control over something I can control myself. Case in point, the stupidity of our government.

Thank you for all the wonderful work you do and I happily enjoy looking at prelude. When I have some money, I totally plan on getting the dreamkeepers saga.

This is so f***ing amazing! Just take my money already, I don't even care! :D

If your going with an online backup, go with dropbox. It is free you can choose for something to be public or not. Whether or not its marked as public or not, it should be available for you on any device you sign in on. If you need more storage space on it you can get up to 16 gigs by referring people.

Glad to know you guys are almost done!

And you're a brilliant artist no question, regardless of reality.

Namah herself recognised how boring reality is by comparison!

when do you think the third volume will be up

May I suggest MediaFire.

If you need backup just buy an external hard drive, back up everything and put it somewere safe (Like the under side of your bed mattress)and WALA!! your years of hard work are safe,(unless ur house catches fire, or gets flooded, or robed or you accedently drop it in the toilet......Whaaat!? It could happen. )