We're back- BLFC was spectacular!

I've never been to the Southwest before, or the West, or to a casino- so, a whole pile of firsts for me.

It was fun watching the Ellen Degeneres slot machine clean people out.

Also a first- we were able to premiere SKIRMISH in the tabletop room, and games raged all weekend long.   Some veteran playtesters attended, plus one of the EPF devs, and a line of new people waiting to be introduced to the game. 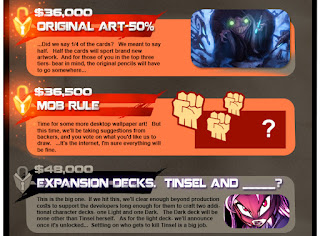 I think we're honing a game that combines a high skill ceiling, with surprising accessibility & enjoyment to low-skill and new players.

At least, I'm fairly low skill, and I had fun- even losing, I was still able to equip the Long Range Gatling Recoil Cannon to Igrath's Bushwack Squad, and watch the blast send Ravat into a flurry which damaged his ally Wisp before they took me out.

The SKIRMISH campaign is in the final days here:  https://www.kickstarter.com/projects/2083757038/dreamkeepers-skirmish-shadow-wars-of-anduruna

Thank you again to everyone at the con who made it such a great experience.
Posted by Dave and Liz at 11:36 AM